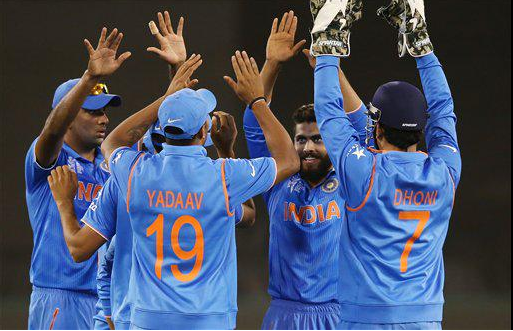 The Indian bowlers kept tumbling the wickets to create one hurdle after another in the Bangladeshi chase. At the end of 40 overs, the score was 169/6.

As soon as the 5th wicket fell, the Indian bowlers were on the driverâ€™s seat. The asking rate leapt to 10 and with 5 wickets in hand, the pressure mounted on Bangladesh. Umesh Yadav bowled 25 dots out of 32 deliveries and that itself showed how tough the Indians had made it. At the end of 35 overs, the score was 139/5. Yadav got rewarded for his clinical bowling as he trapped Mushfiqur Rahim for 27 in the 36th over.

Nasir Hossain was the new man in, and he didnâ€™t waste time, hitting three straight fours.

Earlier, in reply to the mammoth 302 posted by the Indians, the Bangladesh team began with Tamim Iqbal and Kayes in the middle, fending off a Mohammad Shami and Umesh Yadav. The first three overs were seen off very cautiously, but soon, Iqbal took a liking to Shami and slammed him for three boundaries. The riot didnâ€™t last long as he was dismissed for 25 by Yadav in the 7th over, bringing Mahmadullah into the middle.

It was a double whammy for the Indians as they removed the other opener Kayes in the same over for 5. Saumya Sarkar was the next man in and it was left to the two new men at the crease to take the chase forward. The two strikes halted that process, slowed the run rate and at the end of 10 overs, Bangladesh was at 44/2.

The onslaught by the Indian bowlers prompted the run rate to coming down and the asking rate to climb steadily. However, what was important from Bangladeshâ€™s point was the fact that they kept their wickets intact, reaching 63/2 in 15 overs. However, Mahmadullah fell to Shami on 21 in the 17th over, bringing Shakib al Hasan into the middle. At the end of 20 overs, the score was 86/3.

Post the 20 overs, just when Bangladesh looked like they were getting a grip, the Indians picked the wicket of Saumya Sarkar for 29, Mohammad Shami doing the honours in the 21st over. Mushfiqur Rahman joined al Hasan in the middle and took the score to 95/4 in 25 overs. Shakib al Hasan, the one man capable of helping Bangladesh sail through, also departed, thanks to some cheeky bowling by Jadeja, who claimed him for 10 in the 29th over. At the end of 30 overs, Bangladesh were on 105/7.