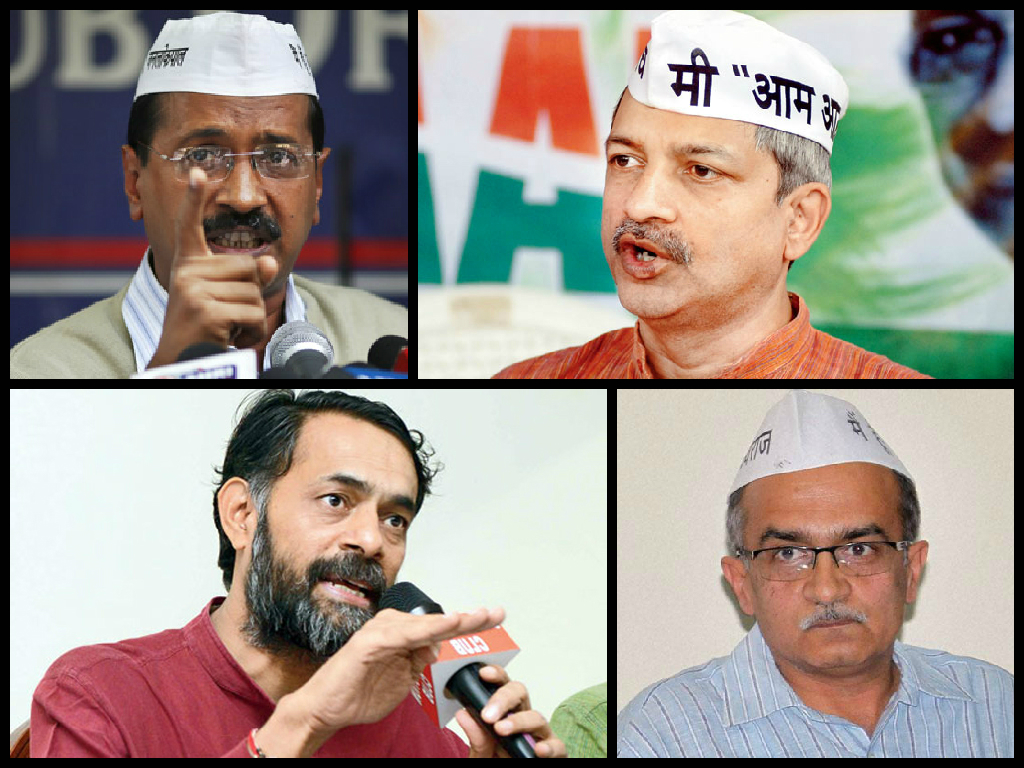 New Delhi: Claims of silencing the bitter feud among the senior leaders in Aam Aadmi Party might have ended on Wednesday night with the removal of Prashant Bhushan and Yogendra Yadav from the PAC, but it seems we have only witnessed the tip of the iceberg.

Minutes after the meeting of the national executive came to an end in the national capital; we saw the dominance of Arvind Kejriwalâ€™s faction within the party. His decision of being uncomfortable to work with the duo had led to the conclusion that both Bhushan and Yadav will be out of AAPâ€™s core group.

It was agreed that the political rift was now water under the bridge and the AAP will get its focus back on Delhi.

But Gandhi shared the details of the national executive meeting for his volunteers, focusing on the principles of the truth and transparency, on the pillars of which the party was formed.

The note of Gandhi to volunteers indicated a rather quick graduation of AAP to hard-nosed power politics. Gandhi in his note wrote, â€œYogendra said that he understood that Arvind did not want them in PAC, as it was difficult to him to work together. He and Prashant would be happy to stay out of PAC, but they should not be singled out.â€

Sharing more details of the meeting Gandhi wrote, â€œThe meeting broke for some time and Manish and others conferred with the Delhi team of Ashish Khetan, Asutosh, Dilip Pandey and others. After reassembling, Manish proposed a resolution that YY and PB be removed from the PAC and it was seconded by Sanjay Singh.â€

On his voting, Gandhi wrote, â€œI abstained to vote, because of two contrary reasons. First, Arvind needs a smooth working in the PAC. So, I agreed that PB and YY may be out of PAC and take some alternate important roles. Second, I was taken aback by the resolution of removing them publicly, especially as they themselves were willing to leave. Also, this decision to sack them was against the overwhelming sentiments of volunteers from all over the world.â€

Gandhi further wrote, â€œSo, while I agreed that they can step down from the PAC, the manner and intention behind the resolution was not acceptable. Hence, the decision to abstain.â€

In the last words of his note Gandhi mentioned, â€œThis is not a revolt, nor is this some publicity ploy. I will not go to the press. There may be some repercussions overt and covert against me. So be it.â€

Yadav, a day after his ouster from the PAC, on Thursday told reporters that he did not believe in holding important posts within the party.

Yadav also refused to comment on Gandhiâ€™s blog post and said, â€œI donâ€™t want to comment on his blog, but I only want to say one thing. Finally, truth prevails.â€

The rift of idealism became clear a week back during the national executive meet on February 26 with the emergence of AAPâ€™s founder member, Prashant Bhushan letter in the media.

Bhushanâ€™s letter pointed out several institutional problems in the party, which were sidelined by Kejriwal who stood for some principles.

AAP which stormed to power in Delhi elections with massive margin in early February has witnessed sharp differences within the party amid allegations that Yadav and Bhushan were conspiring together to remove Kejriwal from the national convenerâ€™s post.

Gandhiâ€™s blog post comes at a crucial juncture and is another turning point in what has become a raging feud within the party.

With the differences in ideas and regular revolts of the senior party leaders, the message is clear that allâ€™s not well in the AAP household.