Home Cityscape How to keep yourself safe from Swine Flu 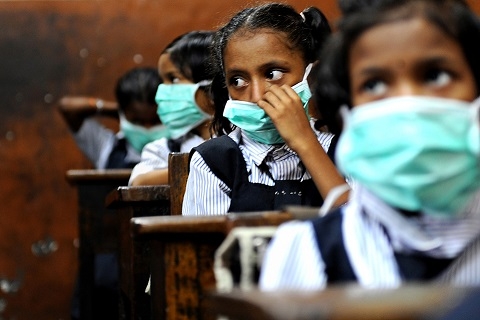 New Delhi: The national capital has reported the second death due to swine flu this year with a 30-year-old man from East Delhi succumbing to the H1N1 virus at a private hospital on Friday.Â

Also, eight fresh cases of swine flu were reported taking the total figure to 31 so far this year.

Easy ways to prevent swine flu (in addition to being vaccinated) include:

Â· Do not touch your nose, mouth, or eyes because the virus can survive on telephones, table tops, etc.

Â· Stay home from work or school if you are ill to keep others healthy.

Â· Avoid large gatherings when swine flu is in season. Flu season shifts a little bit from year to year, but generally peaks in January, although it often starts in October and runs until as late as May. It is possible to get the flu year-round.

We look at swine flu – its origins, symptoms, and medications.

Swine flu, or the H1N1 virus, was declared pandemic by the WHO in August 2010. It made headlines the world over as the virus sprang into action in Asia, America and Europe and has already been seen in 74 countries across the globe

The phylogenetic origin of the flu virus that caused the 2009 pandemics can be traced to before 1918. Around 1918, the ancestral virus of avian origin, crossed the species boundaries and infected humans as human H1N1. The same phenomenon took place soon after in America, where the human virus was infecting pigs; it led to the emergence of the H1N1 swine strain, which later became the classic swine flu.

Swine flu is unusual because it does not target the same age group as the rhinovirus (typical flu). The disease focuses on young adults. This is unusual because most flu viruses attack those who are elderly or very young. Some form of immunity to swine flu may exist in the elderly due to previous flu exposures.

The symptoms of swine flu are very much like those of regular influenza which includes chills, fever, coughing and sore throat.

Although called the swine flu, the virus cannot be transmitted via a pig to humans but only through an infected human to another.

A simple sneeze may cause thousands of germs to spread through the air. The virus can linger on tables and surface areas like door knobs, waiting to be picked up.

The swine flu causes many symptoms similar to regular influenza. Diagnosis can be made by testing a swab of mucus from the nose or throat. For those who have swine flu, the oral drug Tamiflu is recommended.

Oseltamivir, whose trade name is Tamiflu, is an antiviral drug used to treat influenza infections. This drug, or sometimes Zanamivir (Relenza), arenâ€™t used as a preventive measure for swine flu, but are used as treatment if someone has been exposed in the last 48 hours to swine flu, or is suspected of having swine flu.

Injection and nasal spray vaccinations are available to prevent swine flu. The best means of dealing with swine flu is to prevent it. Hand sanitization is important to stop the spread of the virus, and staying away from infected individuals will help stop person-to-person transmission.