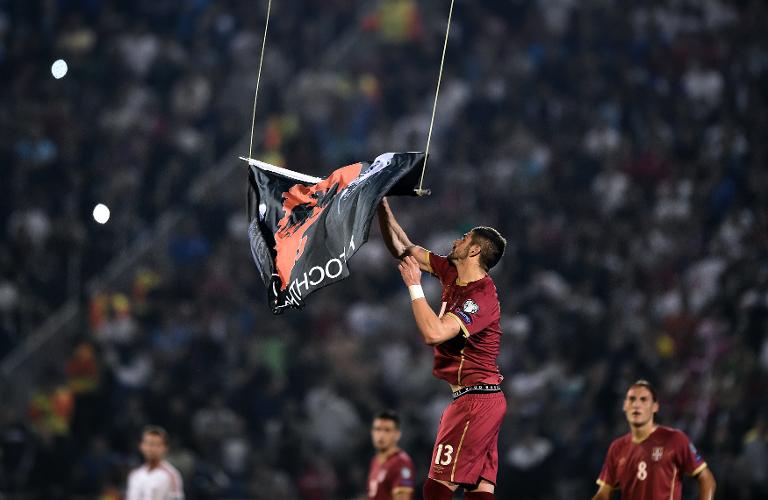 Serbia’s foreign minister said Wednesday an incident in which a pro-Albanian flag flown by a drone sparked violence on and off the pitch at a football match against Albania was a “political provocation”.

The Euro 2016 qualifier between the Balkan rivals had to be abandoned on Tuesday after a banner showing claims for a “Greater Albania” was flown by drone low over the Partizan Stadium in Belgrade.

The flag was pulled down by Serbian player Stefan Mitrovic, triggering a brawl between the two teams.

Some of the 20,000 Serbian supporters ran on to the pitch and attempted to kick and punch the Albanian players until the referee ordered the teams to leave the field as smoke flares and other missiles rained down from the stands.

Albanian fans had been banned from attending the match.

European football’s governing body UEFA said it had opened a formal investigation against both Serbia and Albania over the events.

The violence could endanger a planned historic visit to Serbia by Albania’s Prime Minister Edi Rama and risks inflaming fresh ethnic tensions in the Balkans.

Serbian President Tomislav Nikolic warned of the “clear intentions” of those responsible to “provoke unrest in Serbia and to try to destabilise the whole region”.

Belgrade accused the brother of controlling the drone from his seat in the stadium’s executive box, but Olsi denied having anything to do with the stunt.

The incident drew widespread condemnation. FIFA boss Sepp Blatter said football “should never be used for political messages”, while the European Commission said it was “disappointed” by the violence.

“Imagine if there had been a bomb instead of a flag on the drone,” Platini told French television channel TF1.

The case will be heard on 23 October.

Serbia’s foreign ministry said it had delivered a protest note to the Albanian ambassador demanding Tirana’s clear condemnation of the incident.

Next Wednesday’s visit to Belgrade would be the first by an Albanian prime minister for 68 years.

It was made possible after relations between the often bitter rivals were normalised by an EU-brokered agreement in April 2013.

Albanian officials could not comment on whether the premier intended to go ahead with the trip. He is currently in the United States.

Ties between Tirana and Belgrade have been strained over the issue of Kosovo, the mainly ethnic Albanian province which was formerly under Serbia’s control, and the Albanian minority in southern Serbia, who frequently demand more autonomy.

Kosovo unilaterally declared independence in 2008, a status recognised by more than 100 countries, including the United States and most EU states.

Dusan Janjic, a Serbian political analyst, said: “The intensity of the hatred of both young Albanians and young Serbs (at the match) is amazing — it is, of course, a major political and international scandal.”

The premature end to the match was greeted with joy by 5,000 Kosovar Albanians who gathered to watch on TV in Kosovo’s capital Pristina, shouting “Greater Albania” and “victory”.

Serbia’s captain, Chelsea defender Branislav Ivanovic, said he was dismayed by the incident.

“In the name of my team I can say that we wanted to continue the match… but the Albanian players said they weren’t in the physical or psychological state to continue,” he said.

The Serbian federation said the Albanian delegation had rejected all proposals to continue the match. Serbia demanded it be awarded a 3-0 victory.

NATO carried out a 78-day bombing campaign which led to Serb troops pulling out of Kosovo in 1999 and brought an end to the Serbian government’s repression of the ethnic Albanian population.