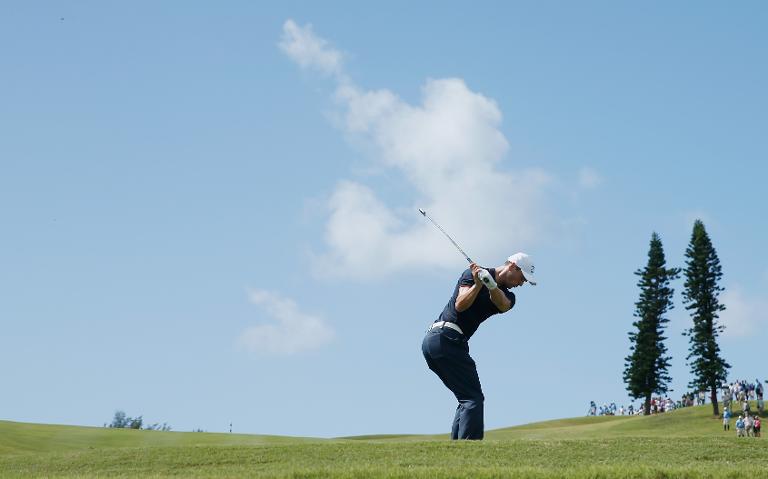 Kaymer, who collected his second career major title last June at Pinehurst, and Watson, the big-hitting US star who won his second green jacket last April, each finished the 36-hole showdown of major winners on six-under par 136 at Bermuda’s Port Royal layout.

But in a replay of the 18th hole that both parred in the final round, Kaymer birdied on a 10-foot putt similar to one on the same line he had faced a few minutes earlier from twice the distance while Watson missed a short birdie bid to hand Kaymer the crown.

“I was surprised he missed it,” Kaymer said. “You don’t want to win a golf tournament that way. Of course I would take it, but you don’t really want the other guy missing a short putt.”

Watson said the windy conditions ruined what he saw as a strong final putt.

“I thought I hit a great putt. Stroked it well,” Watson said. “I’m guessing wind bounce. There’s no way that ball should go that way, unless it’s wind forced. So, just one of those things. It was Martin’s time and not my time.”

Kaymer knew, however, that Watson’s putt was trickier than it appeared.

“I had a similar putt earlier in the regular round, just half an hour before we were standing there in the playoff, but his was a little bit longer and I knew that it was not an easy putt,” Kaymer said.

“My putt, it was quite an advantage that I had the similar putt earlier, just a little bit longer, but pretty much the same line and I knew it didn’t break as much as I thought. So that helped me a lot. It was a good stroke and so it went in.”

Kaymer opened Tuesday with a 65 to carry a four-shot lead over Watson into the final round but could only manage a 71 Wednesday while Watson charged back with a 67.

“Somehow, I made that run of birdies on some tough holes in tough windy conditions,” Watson said. “Martin played the best all week. He didn’t really hit too many wayward shots and came away as the champion.”

Rory McIlroy, who won the British Open and PGA Championship to boost his major title total to four, fired a 75 to finish third on 144, one stroke ahead of Jim Furyk, who closed with a 73.

Furyk made the field after McIlroy’s double major win opened a space and Australian Adam Scott, the leader in a points placement system to determine alternates, passed on playing due to a schedule conflict.

Kaymer twice squandered a three-stroke lead and it was Watson who led by two shots after he birdied the par-3 16th while Kaymer took a bogey.

But Kaymer responded with a birdie at the par-5 17th while Watson found water off the tee and made bogey, leaving the duo deadlocked and setting up the playoff.

“When I was standing on the 17th tee box, before Bubba hit, I knew I don’t have anything to lose anymore,” Kaymer said.

“I was two shots behind, I can be very aggressive with everything now. So then Bubba hit it in the water and then I hit a very nice tee shot. I just stayed aggressive.”