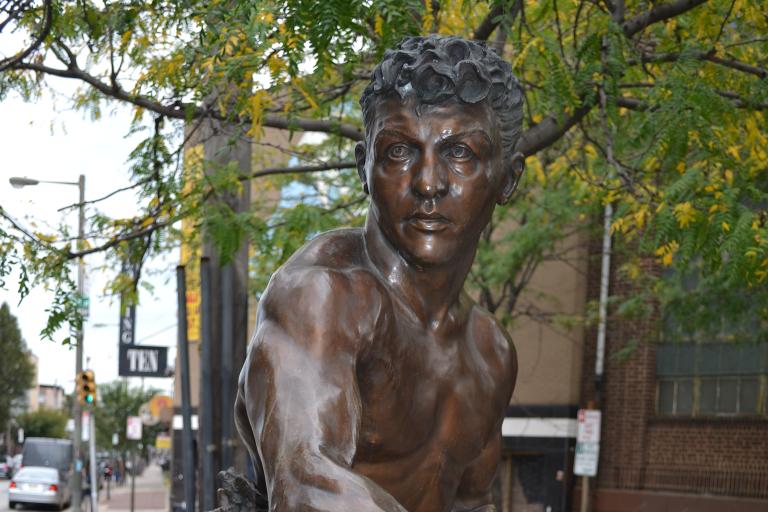 They are buried in unmarked graves, unloved and unknown.

Philadelphia may be the setting of the “Rocky” films, but the fighters who made it once one of the most famous cities in the boxing world are in many cases dead and in danger of being forgotten.

In a different era and with a less tragic ending, Tyrone Everett could have been a global superstar. In modern-day boxing, with the riches sloshing around at the top echelons of the sport, he would have been a millionaire many times over.

Instead, in May 1977, six months after the southpaw from south Philly lost a world title showdown in what is widely considered one of the worst decisions in boxing history, Everett was shot and killed by his girlfriend. He was 24, cut down in his prime.

“He was super popular. A lot of friends, a lot of girlfriends. He was super stylish, super cool, super handsome, everyone loved him. He was a star,” John DiSanto, who runs the comprehensive phillyboxinghistory.com website, told AFP.

DiSanto, 52, never met Everett, but says he was struck by the outpouring of public emotion that greeted the brilliant super featherweight’s untimely death.

“At the funeral service, his brother Mike, who was also a prominent fighter and now a friend of mine, insisted that they open up the casket so people could see that Tyrone was still this beautiful guy because his face was unmarked,” said DiSanto, recalling media reports at the time.

“So I was swimming in all this detail: there’s this popular guy, all these people came out to his service. And — maybe it’s the Catholic in me — but I thought: I need to go out to this graveyard and pay my respects.”

But when DiSanto, one of the leading experts on boxing in Philadelphia, got to the graveyard, he was in for a shock.

“It was just a patch of grass. He had been dead 30 years. And I was immediately struck by the thought: maybe I could get him a headstone.”

DiSanto, using his extensive boxing connections in Philadelphia, tracked down Everett’s mother to tell her his idea and ask her permission.

“She was super happy, moved, surprised that anyone cared or remembered her son. He was like the apple of her eye and she just started crying because she was right back with her son, her baby boy, that was murdered,” DiSanto said.

Thanks to the Gravestone Fund Program — DiSanto’s initiative to honor the boxing legends of Philadelphia’s past and financed by a combination of donations, the families or his own money — Everett now has a headstone.

As do the slick Garnet “Sugar” Hart, the fearless Eddie Cool — dead from drink at just 35 — and Gypsy Joe Harris, whose boxing license was revoked when officials discovered he was hiding his blindness in one eye. He became a heroin addict and was dead at 44, his body dumped in a communal grave.

“When they stopped me, I was broken,” he said a year before his death in 1990. “It was like taking a brick and throwing it at a mirror. To me, it was the deepest hurt. It was like a piece of me had died. They killed me.”

Nobody knows how many more of Philadelphiaâ€™s forgotten fighters are lying in unmarked graves dotted around the city, their legacies — and with it Philadelphia’s reputation as a boxing city — fading gradually year by year.

DiSanto has 10 more fighters from Philadelphia’s boxing heyday that he would like to honor with gravestones, but it is not always straightforward.

Funding is a problem; the boxer’s families are occasionally suspicious; and delving into the past can drag up unresolved issues that sometimes relatives would rather leave with the dead.

“On the good side, people remember these guys. So it brings their names up, names that haven’t been talked about. That’s one of my goals,” he said.

“But on the bad side, it’s always the same story, ‘Why does this guy not have a gravestone?’ It’s such an outrage.”

DiSanto is keen not to point the finger at the families and says it is the “boxing establishment” that has let down many of Philadelphia’s finest.

“These people are going on bare-bones burials. They don’t have the money. In many cases it’s a miracle they can scrape together the money to do the minimum — a funeral service and bury them. So a gravestone does not come into the picture,” he said.

“But it raises a judgment that I’m not comfortable with because it’s a judgment either on the family, or on the deceased.

“It is an indictment on boxing because these guys gave their lives and were not the same physical specimens as when they started.

“And for all that, they have nothing.”