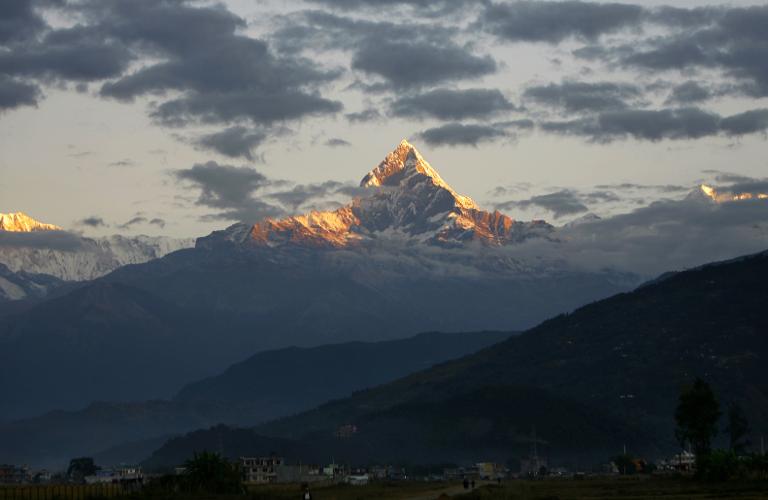 A snowstorm and avalanche in Nepal’s Himalayas has killed 17 trekkers and guides — nine foreigners and eight Nepalis — on a popular hiking route, while more than 100 others remain out of contact, officials said Wednesday.

Severe weather triggered by the tail end of Cyclone Hudhud, which battered neighbouring India’s east coast, hit trekking groups on the Annapurna circuit as well as mountaineers trying to scale the avalanche-prone Mount Dhaulagiri in central Nepal on Tuesday.

As the weather cleared on Wednesday in the remote Mustang and Manang districts, rescuers trudging through waist-deep snow found 27 stranded trekkers, an official said.

But some 168 foreign tourists were registered to hike in the districts and authorities are now trying to track the rest of them down, said police official Ganesh Rai who is heading the rescue effort.

“Two Slovakian climbers and three Nepalese guides are missing at Dhaulagiri base camp after an avalanche, they were here to scale the mountain,” local official Tulsiram Bhandari told AFP from Myagdi district.

“There has been heavy snowfall in the area, up to three feet (91 centimetres),” said police official Rai.

“We have found twelve bodies in Mustang, including four foreigners — two from Israel, one from Poland and one from Vietnam,” Rai told AFP, correcting his earlier information that two of those killed were Polish.

Rescuers, aided by a Nepal army helicopter and several others hired by trekking agencies, also found the bodies of five hikers caught in an avalanche in neighbouring Manang.

“A chopper search has located the bodies of five people, including four Canadians and an Indian, killed in an avalanche,” Rai said.

In a separate incident in Manang, three yak herders were killed in another avalanche on Tuesday while grazing their animals, district official Devendra Lamichanne told AFP.

Another official said he hoped those trekkers still unaccounted for had simply been cut off by the blizzard and poor telecommunications.

“The phone network is not very good so we have not been able to get in touch with the missing, but we hope to find them later today,” said Mustang district official Baburam Bhandari.

Injured victims were taken to local hospitals for treatment while a few with minor injuries were airlifted to Kathmandu. Details of those rescued, including their nationalities, were not known.

In a separate incident, rescuers are searching for a 67-year-old Frenchman who fell into a river on Tuesday while following the Manaslu trekking route, police said.

Thousands of trekkers visit the Annapurna region every October, when weather conditions are usually favourable for hiking.

However, the region has seen unusually heavy snowfall this week as a result of Cyclone Hudhud.

The cyclone also sparked heavy downpours in other parts of central and western Nepal, including the hilly Gorkha district, where the French trekker slipped and fell into the Budhi Gandaki river.

“The accident happened around 9 am on Tuesday… we think it was because the track was slippery due to recent heavy rains. Rescue operations are ongoing,” Gorkha police chief Ramesh Thapa told AFP.

The hiker was part of a team of 10 tourists heading up the scenic Manaslu route, named after Mount Manaslu, the world’s eighth highest peak. It has been developed as an alternative to the crowded Annapurna circuit.

In April the deadliest disaster to hit Mount Everest killed 16 people and forced an unprecedented shutdown of the world’s highest peak.

The avalanche that tore through a group of sherpas — who were hauling gear up the mountain for their foreign clients before dawn — saw scores of expeditions cancelled.

The effective closure of the 8,848-metre (29,029-foot) mountain for the season dealt a huge blow to impoverished Nepal, which relies heavily on tourism revenues from climbing and trekking.