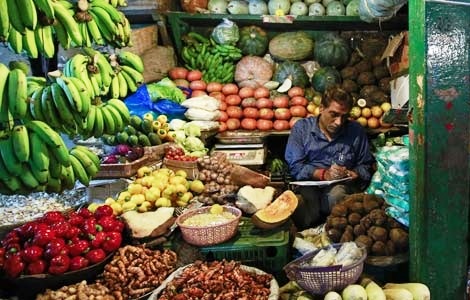 New Delhi: Continuing decline in food prices, including vegetables, pulled down the September wholesale price inflation to a five year low of 2.38%.

As per data released by the government on Tuesday, the food inflation fell to a nearly two-and-half year low of 3.52%. Food inflation is on decline since May.

The sharp drop in WPI inflation comes just at the back of retail inflation declining to a record low of 6.46% in September.

Wholesale inflation in onion contracted to 58.12% in September as compared to a contraction of 44.7% in the previous month.

The data further revealed that inflation in milk, eggs, meat and fish continued to decline in September as well. However, there was slight increase in the prices of fruits during the period.

Inflation in manufactured products, like sugar, edible oils, beverages and cement, fell to 2.84% in September as against 3.45% in the previous month.

The WPI inflation declined for the fourth straight month, the data released by the government said.

Inflation in the fuel and power segment which include LPG, petrol and diesel declined to 1.33% as compared to price rise of 4.54% in August.

Meanwhile, wholesale inflation based on final index for July has been revised upwards to 5.41% from the provisional estimate of 5.19%.

The September WPI data is also provisional, the statement said.

The Reserve Bank, which has kept its key interest rate unchanged since January citing inflation pressures, is scheduled to announce its next bi-monthly monetary policy on December 2.Â The Central bank primarily factors Consumer Price Index while deciding on policy rate.