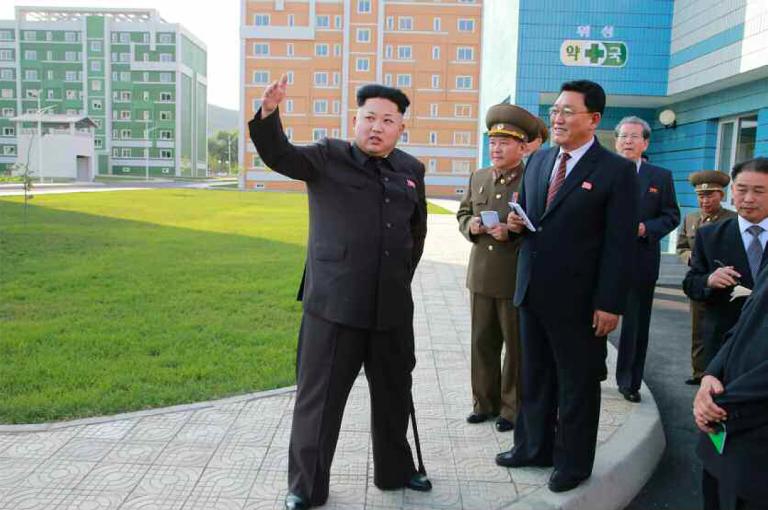 North Korean leader Kim Jong-Un has finally resurfaced with the help of a walking stick after a prolonged, unexplained absence that fuelled rampant speculation about his health and even rumours of a coup in the nuclear-armed state.

State media on Tuesday reported that Kim, who had not been seen in public for nearly six weeks, made an inspection tour of a newly-built housing complex in Pyongyang and a science institute.

The front page of the ruling party newspaper Rodong Sinmun was mostly taken up with a large close-up portrait of a smiling Kim, photographed from the waist upwards.

The daily carried smaller, full-length photos showing Kim leaning on a black walking stick in his left hand as he toured the residential complex built for scientists working on North Korea’s satellite programme.

The visit was also reported by state TV, but using the same pictures and without any video footage, making it impossible to judge just how mobile Kim was.

KCNA did not specify the date of the visit, but the agency usually reports such events the day after.

It also made no mention of Kim’s absence from the public eye and offered no insight into his physical wellbeing.

Kim, believed to be 30 or 31, dropped out of sight after attending a music concert with his wife in Pyongyang on September 3.

While there is precedent for a North Korean leader to “disappear” for a while, the absence was more noticeable with Kim, who has maintained a particularly pervasive media presence since coming to power after the death of his father Kim Jong-Il in late 2011.

Competing theories on his disappearance ranged widely from an extended rest period to a leadership coup, via a long list of possible illnesses and ailments including broken ankles, gout and diabetes.

The rumours multiplied after Kim failed to attend a major political anniversary event on Friday, at which other top leaders were present.

The only North Korean mention of a possible health problem came in a state TV documentary several weeks ago which spoke of Kim’s “discomfort”.

Kim, a heavy smoker, has shown striking weight gain since coming to power and recent TV footage had shown him walking with a pronounced limp.

“It’s still not clear how much he has recovered from the apparent ‘discomfort’ or how serious it was,” said Kim Yeon-Chul, a North Korea expert at Inje University in the South.

“The important thing is that this really corroborates observations by South Korea, China and the United States that Kim is ruling normally.”

Given the supreme importance of the leadership of the Kim family dynasty in North Korea, there had been speculation that a further extended absence might lead to a period of instability.

His reappearance followed a rare exchange of heavy machine-gun fire over the inter-Korean border on Friday, after the North’s military tried to shoot down some leaflet-laden balloons launched by South Korean anti-Pyongyang activists.

Some analysts suggested Pyongyang had not moved to silence the rumour mill earlier because it craves international attention, especially attention motivated by uncertainty.

“But then it’s not as if they had a plan to not show the leader for a month and let the world go into a frenzy. We created the frenzy ourselves,” said John Delury, a North Korea expert at Yonsei University in Seoul.

The North’s propaganda machine has always pushed an image of Kim Jong-Un as young and dynamic, but Delury said it would have little problem spinning the walking stick.

“Assuming this is what it looks like — not a life-threatening or debilitating condition — they’ll probably push the line that he hurt himself working for the country and the people,” he said.

The narrator of the TV documentary in late September said Kim had kept up his field guidance trips “despite suffering discomfort”.

Kim was accompanied on his visit to the residential complex by several top officials including Hwang Pyong-So, the vice chairman of the powerful National Defence Commission who is widely seen as Kim’s number two.

Hwang led a top-ranking North Korean delegation that made a surprise visit to the South just over a week ago.