Home Sports Fly-half Cooper back on bench for embattled Wallabies 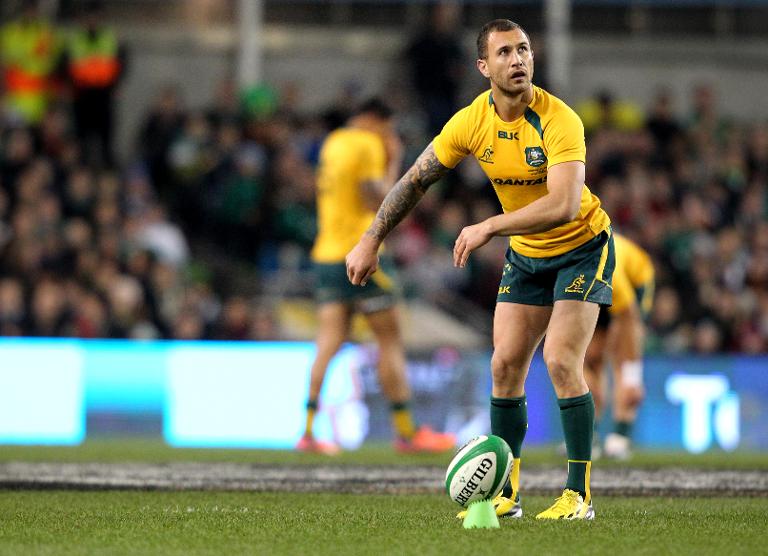 Mercurial fly-half Quade Cooper was among the reserves named Tuesday for the embattled Wallabies with Adam Ashley-Cooper chosen for his 100th Test against the All Blacks in this weekend’s Bledisloe Cup clash.

Under-fire coach Ewen McKenzie made two changes to his starting line-up with Christian Lealiâ€™ifano at inside centre and Rob Simmons returning at lock for a team that lost 21-17 to Argentina on October 3.

Lealiâ€™ifano replaces the injured Matt Toomua while Simmons displaces James Horwill from the beaten side in Mendoza.

Cooper has not played for Australia this year after suffering a shoulder injury in May, when he lost his place to Bernard Foley.

The Queensland Reds playmaker will make his return via the bench with Foley installed as the first-choice number 10.

Ashley-Cooper will become the sixth player in Australian rugby history to reach the 100-Test milestone in Saturday’s final Bledisloe Cup showdown in Brisbane against a New Zealand team that has already retained the trophy.

“Adam has had a remarkable career and he deserves the accolades which come with joining what is an extremely elite group of players to have played 100 games for Australia,” McKenzie said.

â€œItâ€™s a massive honour and a true testament of his ability to play at a consistently high level over such a long period of time.”

“Itâ€™s always hard when you have to watch from the sidelines, so Iâ€™m sure they will be determined to make the most of their opportunities,” he said.

“Theyâ€™re two experienced players who have performed at a high level for Australia before, and you canâ€™t discount the value of experience in these big games.

â€œQuade has had a lot of great memories at Suncorp Stadium, and weâ€™ll be looking for him to provide the same impact should he get called on late in the game.â€

McKenzie has had a tumultuous week dealing with the fall-out of the Kurtley Beale text scandal which led to the resignation of team business manager Di Patston.

The coach was forced to deny having an affair with Patston and rejected reports of team splits over her role in the running of the team.

Beale faces an Australian Rugby Union code of conduct hearing, with his future in serious doubt, following the publication of the text messages between him and Patston.

The fallout has put McKenzie’s coaching position under scrutiny at a time when his success rate has slumped to 52 percent from his 21 Tests in charge.

“The group has spoken about the importance of this weekâ€™s game and ensuring the focus remains on our preparation and putting the team in the best possible position to win the game on Saturday night,” McKenzie said.

“Itâ€™s always important to perform in front of your home fans, and this week offers the team a chance to end the 2014 home Test season unbeaten, and square the series against New Zealand.”