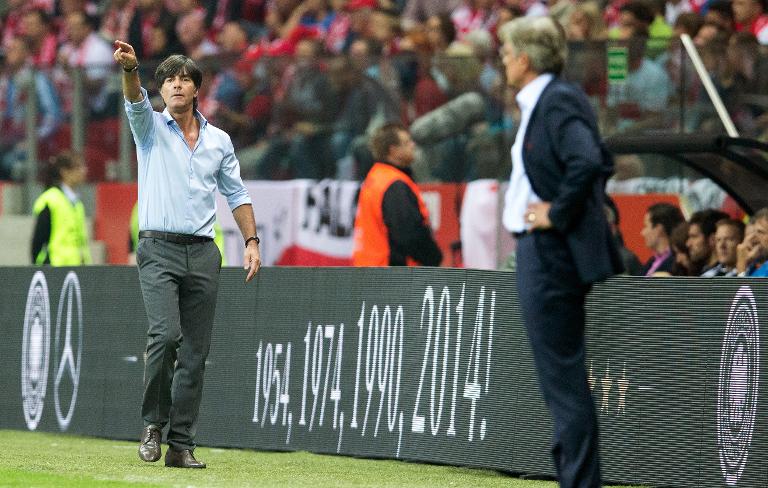 Germany coach Joachim Loew insists the world champions will still qualify for Euro 2016 despite their shock defeat to Poland as they struggle to adapt after lifting the World Cup.

Loew’s Germany suffered their first defeat in 33 qualification matches, dating back to October 2007, when they lost 2-0 to Poland in Warsaw on Saturday.

Poland claimed an historic first win over their neighbours at the 19th attempt, less than three months after Germany were crowned world champions in Rio de Janeiro.

The result leaves Germany fourth in Group D behind leaders Poland, the Republic of Ireland and Scotland after two matches, with Georgia and Gibraltar also in the group, but Loew refuses to panic.

“It’s not surprising that every team now wants to give a few more percent (effort) against the world champions and there have been significant changes to our team since the World Cup,” he said.

“In the next two years, our players will pick up experience from which they will learn.

“Life is not harder, despite the defeat, in fact it’s much, much nicer since the World Cup.

“We have to learn our lessons and take something from it, but I am sure we will turn things around.

“I don’t see any major problems with qualifying.

“The fact we now need to take maximum points is clear, we lost here, but it continues on Tuesday.”

The Germans now face Martin O’Neill’s Ireland in Gelsenkirchen on Tuesday with the Irish buoyed by Saturday’s 7-0 demolition of minnows Gibraltar when captain Robbie Keane scored a hat-trick.

Injuries and retirements have robbed Loew of experience in key positions since winning the World Cup and the Poland defeat cost his team confidence.

Loew named inexperienced wing-backs Erik Durm and Antonio Ruediger in Warsaw and defensive midfielder Christoph Kramer won only his eighth cap, but only attacking midfielder Karim Bellarabi impressed as he made his debut.

Germany failed to score despite 62 percent possession and 28 attempts on goal with Lukas Podolski rattling the woodwork in the second half and Bellarabi squandered a string of chances.

Poland hit Germany hard on the counter-attack as the hosts converted two of only four chances, Ajax Arkadiusz Milik heading them ahead in the second-half with their first clear chance.

Loew, who is under contract until 2016, is pragmatic about the Warsaw defeat.

“I don’t see things as being too dramatic, I think Poland were very committed and highly motivated against the world champions,” said Loew, who included six of the side which started the World Cup final.

“We wanted to take the three points, but you could see in training that things weren’t happening automatically.

“The team’s attitude and concentration were absolutely fine, but the young players have to gain experience

“We lost for the first time after 33 (qualification) matches, that can happen from time to time.”

Since winning the World Cup, Germany were comfortably beaten 4-2 by Argentina in August’s friendly, then laboured to a 2-1 win at home to Scotland in their opening Euro 2016 qualifier before coming unstuck in Warsaw.

Defensive frailties and an inability to finish chances — which had blighted Germany before their Brazil campaign — came back to haunt Loew.

The world champions are now under pressure to beat Ireland to get their campaign back on track having never previously failed to qualify for a European championships.

The Irish last beat Germany 20 years ago, but current manager O’Neill says his side are in buoyant mood and will look to cause their hosts further difficulties.

“We have some attacking options that I think can cause them problems,” said the 62-year-old.