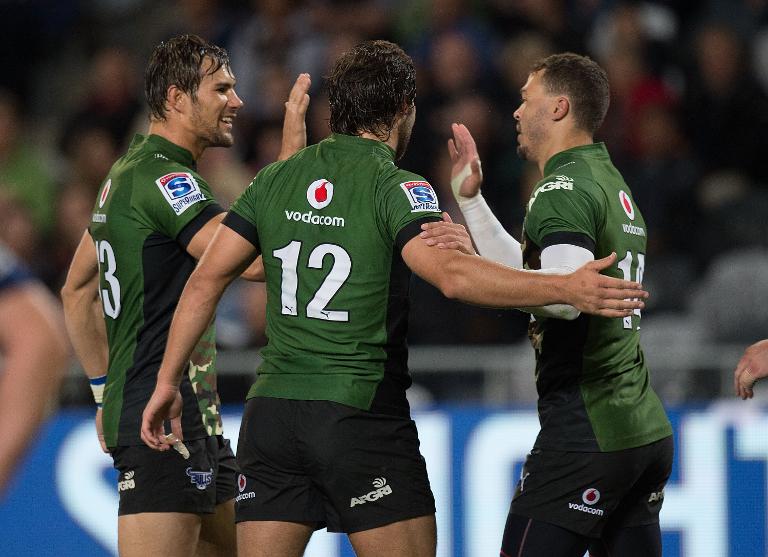 The hat-trick took his Cup career try total to 50 and helped the Bulls to a 46-12 triumph over lowly Griquas at Loftus Versfeld stadium in Pretoria.

Basson and his fellow Bulls revelled in the pressure-free atmosphere as they played knowing they had already made the last-four of the oldest national inter-provincial rugby competition.

Fellow semi-finals contenders the Pumas and the Cheetahs lost earlier, leaving the Bulls to face Western Province in Cape Town this Saturday.

The Golden Lions trounced the Cheetahs 47-7 at Ellis Park in Johannesburg to seal a home semi-final against title-holders the Sharks the same day.

While Basson was wreaking havoc against the Griquas, team-mate and leading Currie Cup points scorer Jacques-Louis Potgieter lifted his season tally to 112 with three conversions and two penalties.

Another Bulls try-scorer was Handre Pollard, a star when South Africa defeated New Zealand in a Rugby Championship thriller last weekend, who came off the bench to replace Potgieter.

Griquas trailed by only one point late in the first half but fell away after half-time as skipper and hooker Rayno Barnes was red-carded for verbally abusing the referee.

Leading Currie Cup try-scorer and Lions flanker Jaco Kriel grabbed his eighth this season to trigger the rout of a Cheetahs bolstered by the return of three Springboks forwards.

But the anticipated influence of prop Trevor Nyakane, lock Lood de Jager and flanker Teboho ‘Oupa’ Mohoje never materialised and the latter was yellow-carded for a professional foul.

With first place assured, Province chose a team to tackle the Sharks at Newlands stadium in which only flanker Sikhumbuzo Notshe may start against the Bulls.

Province surprisingly led 20-11 at half-time only for the Sharks to score 17 unanswered second-half points with a 64th-minute try from prop Lourens Adriaanse pivotal.

Kings, who are being groomed to compete in an expanded 18-team Super Rugby championship from 2016, put a cheer-less season behind to inflict a fourth consecutive defeat on the Pumas.

The hosts surrendered a 19-3 advantage only to snatch victory when full-back Scott van Breda scored a try which fly-half Gary van Aswegen converted from the touchline.