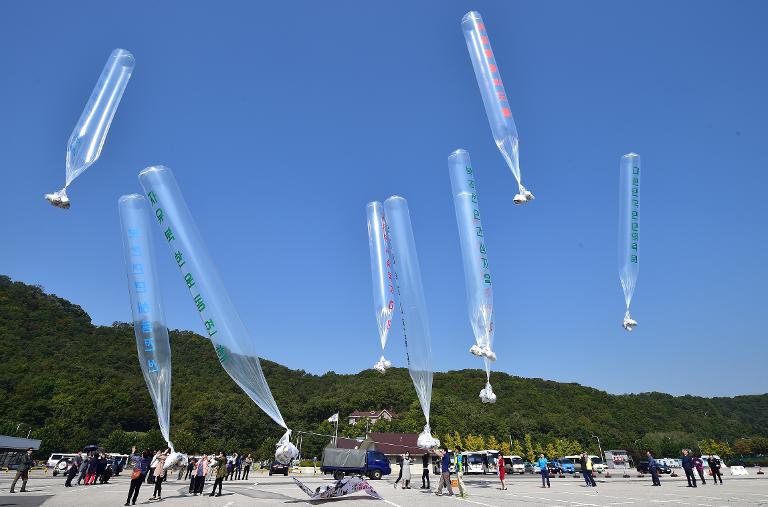 North Korea’s state media said Saturday high-level talks with Seoul were now all but scrapped over the launch of anti-Pyongyang propaganda leaflets from the South, which triggered an exchange of fire across the tense border.

The two Koreas had agreed a week earlier to work on resuming a formal high-level dialogue that has effectively been suspended for seven months, raising hopes of a thaw in strained relations.

But the two Koreas traded heavy machine-gun fire across their border Friday, prompted by the North Korean military trying to shoot down balloons carrying the leaflets that activists launched from the South.

Some rounds fell on the Southern side, which then responded with high-calibre machine gun fire. No casualties were reported on the South’s side, and none are believed to have taken place in the North.

“Because of the irresponsible and provocative acts by the puppet regime… the planned high-level meeting is all but scrapped,” Pyongyang’s official Internet news provider Uriminzokkiri said.

However it did not shut the door completely.

“It is totally up to the South Korean puppets’ attitude what would happen to the North-South Korean relations in the future,” it added.

“We’ve decided to stop the launches for our own safety,” Lim Jae-Gwan, the head of Jung Village who led the blockade, was quoted as saying by Yonhap.

The activists later moved some 30 kilometres south to Pochon County and managed to launch only one of 15 gas-filled balloons they had prepared to send leaflets across the border.

“We physically stopped them from launching balloons as such activities might put the residents here in harm’s way,” a police official in Pochon told AFP, requesting anonymity as he was not authorised to speak to the media.

The agreement to hold bilateral talks had come last week during a surprise visit to South Korea by three top-ranking North Korean officials, two of them close aides to paramount leader Kim Jong-Un, ostensibly to encourage North Korean athletes and attend the closing ceremony of the Incheon Asian Games.

Pyongyang had repeatedly warned of a “catastrophic” end in cross-border ties unless South Korea halted the launch of the leaflets as the North marked the anniversary of the founding of its ruling Workers’ Party.

The North Korean website said the South should have taken its warnings seriously and prevented such launches if it really wants dialogue and improvement in inter-Korean ties.

“The real culprits of this leaflet-launching commotion are the United States and the puppet regime,” it said.