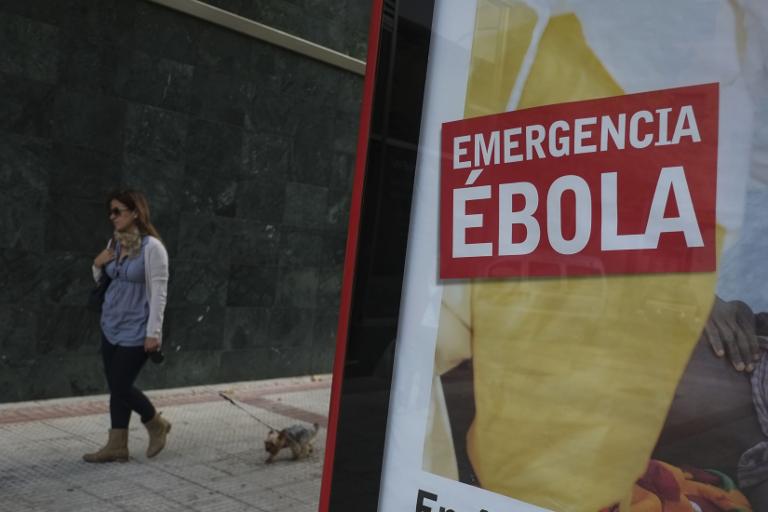 A top US health official urged swift action Thursday to prevent the deadly Ebola virus from becoming the next AIDS epidemic, while a Spanish nurse was at “serious risk” of dying.

Teresa Romero, 44, is “very ill and her life is at serious risk as a consequence of the virus,” Madrid’s regional president Ignacio Gonzalez told parliament.

She is the first person known to have been infected with Ebola outside Africa.

The United Nations chief meanwhile called for a 20-fold increase in the world’s response to the spread of Ebola, which has killed nearly 3,900 people in West Africa since the beginning of the year.

Ebola’s spillover into the United States and Europe has raised fears of a wider outbreak, and led the United States, Canada and Britain to start tougher airport screening of passengers arriving from West Africa.

The US Centers for Disease Control and Prevention predicted the number of cases could mount to 1.4 million by January unless strong measures are taken to contain the disease, which is spread though close contact with the bodily fluids of an infected person.

“We have to work now so that it is not the world’s next AIDS,” CDC Director Tom Frieden told the heads of the United Nations, World Bank and International Monetary Fund gathered in Washington.

“I would say that in the 30 years I’ve been working in public health, the only thing like this has been AIDS,” he added, warning of a “long fight” ahead.

Health officials said they would monitor about 50 other people — mostly health staff — who had been in contact with her for the duration of the 21-day Ebola incubation period.

Thirteen other people are in quarantine at the hospital as a precaution, including Romero’s husband and several health workers, according to the latest tally from the hospital.

Among those admitted on Thursday were two hairdressers who had contact with Romero.

One of Ebola’s latest victims is Thomas Eric Duncan, the first patient cared for in the United States to die of the disease.

Duncan was the first person diagnosed of Ebola in the United States and the first to die in a US hospital of the hemorrhagic fever that has killed 3,900 in West Africa this year.

French Health Minister Marisol Touraine said she was working with the authorities in countries badly affected by Ebola “to see in which conditions we can reinforce departure controls”.

Britain said it would start “enhanced screening” of people coming from Ebola-hit parts of West Africa at Heathrow and Gatwick airports and on Eurostar trains from Belgium and France.

The European Commission was expected to meet on October 17 to discuss possible new ways to monitor passengers arriving from affected countries.

Doses of a prototype Ebola vaccine developed by Canada remain in the country even though they were offered to the World Health Organization nearly two months ago, the health minister said Thursday.

“The WHO has not decided when and if it will distribute it,” Health Minister Rona Ambrose said. “We hope they are able to use it.”

The vaccine has not been tested on humans but has shown promise in animal research, Ambrose said in August.

It is one of two vaccines considered promising by the WHO for clinical trials ahead of commercialization.

The continuing outbreak in West Africa forced officials in Liberia — the nation worst hit by the Ebola outbreak — to postpone nationwide elections.

Almost three million voters had been due to go to polling stations on Tuesday, but organisers said there was no way a “mass movement, deployment and gathering of people” could go ahead without endangering lives.

In Guinea, global aid agency Medecins Sans Frontieres said a surge of Ebola cases had pushed its treatment unit in the capital Conakry to its “physical limits”.

Speaking to the UN, World Bank and IMF chiefs in Washington, Sierra Leone President Ernest Bai Koroma assailed the global response to the epidemic thus far, saying it was moving more slowly than the spread of the disease.

“This slower-than-the-virus response needs to change,” he said.

UN Secretary-General Ban Ki-moon said resources to support the fight must be increased 20-fold, and urged nations to act without delay.

World Bank President Jim Yong Kim admitted that the world was “behind the curve” in the fight against Ebola.

Eleven people in Australia have been tested for Ebola in recent weeks, but so far no cases have been detected, officials there said Friday.