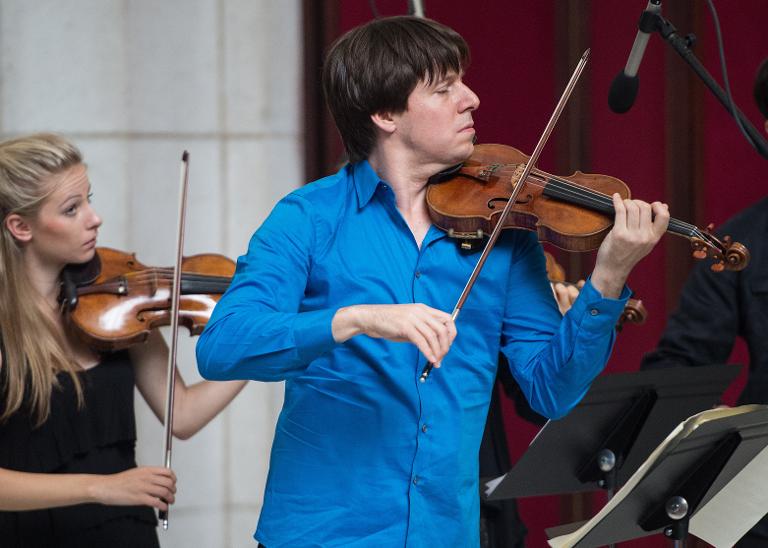 More than seven years ago on a cold January morning, virtuoso violinist Joshua Bell stood in an entrance to a Washington metro station disguised as a street performer and played his heart out.

Since then, the story of Bellâ€™s social experiment — which saw more than 1,000 people pass him by and only 27 stop to listen — has become nearly as famous as the Grammy award-winning musician himself.

But on Tuesday, Bell was back in Washington, wanting to prove that, if given a proper chance, the city’s people would listen — in neck-craning hordes.

Once again staking out ground in the public transportation system â€“ this time at midday at the city’s Union Station train hub â€“ Bell, accompanied by nine young string players, played with his trademark passion.

And this time, amid the station’s whirr and hum, people listened.

More than 1,000 fans and curious onlookers packed half of the station’s cavernous main hall for the free 30-minute concert, which included selections by Bach and Mendelssohn.

“The whole idea of the original stunt, I think, for me, was to show that you need active listeners. Thereâ€™s two parts to the equation of making music,” the 46-year-old Bell told AFP.

“I wanted to show that even though the surroundings are similar, if you have active people who are really there to listen you have a wonderful experience, and it turned out much better than I could have imagined.”

The 2007 stunt, which was chronicled in The Washington Post and earned its author Gene Weingarten a Pulitzer Prize, raised questions about beauty and societyâ€™s perception of it.

Bell, whose concert hall performances are regularly sold out and who plays on a Stradivarius violin that reportedly cost him around $3.5 million, earned just over $32 when he set out his case at the Lâ€™Enfant Plaza metro stop in 2007.

Disguised in a black baseball cap, his efforts went nearly unrecognized in the station at the heart of federal Washington.

“If a great musician plays great music but no one hearsâ€¦ was he really any good?” wrote Weingarten.

Seven years later, Bell said the concert has become a sort of defining moment, with the article repeatedly making the rounds on social media websites.

“There still isnâ€™t a week that goes by without someone remarking that if they had been there, they would have stopped and listened,” he said.

But the Indiana native claims he was not really surprised by how the experiment unfolded.

“Music needs that attention — you canâ€™t throw it to people while theyâ€™re rushing to work,” Bell said.

But members of Tuesdayâ€™s audience felt sure they could never have ignored him.

Ginger Reich, 62, a retired World Bank employee, said that the commuters at the Lâ€™Enfant Plaza Metro stop had engaged in stereotyping.

“They think, ‘Heâ€™s at a Metro stop so not really a real musician’,” Reich said.

Meaghan Kilner, a 13-year-old violin student, said she might not have recognized Bell, “but I would have known it was better quality.”

Children, Weingarten reported in 2007, were the only demographic that repeatedly tried to stop and watch Bell.

Tuesdayâ€™s concert coincided with the release of Bell’s new album “Bach” and comes ahead of HBOâ€™s “Joshua Bell: A YoungArts MasterClass” documentary that airs on October 14.

Following the performance, Bell said, he would hop on a train.