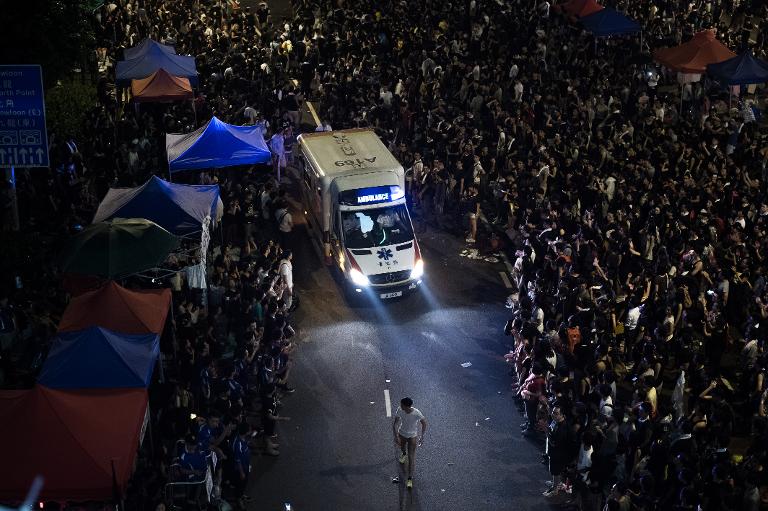 As dawn broke over the city, demonstrators streamed to the square in the city’s downtown Wanchai district ahead of an 8am (midnight GMT) flag-raising ceremony to mark the 65th anniversary of the founding of Communist China.

A heavy police presence was already in effect near the square, where several Communist Party officials were expected to appear along with Hong Kong’s embattled leader Leung Chun-ying.

Leung has faced mounting calls to resign and accusations of failing to engage with protesters after their “Umbrella Revolution” campaign for universal suffrage sparked the biggest civil unrest in decades.

With many Hong Kongers off work for the October 1 public holiday, protest leaders were confident of mustering massive crowds across the city Wednesday, angered at Beijing’s refusal to grant full democracy in leadership elections in 2017.

Protesters on Tuesday ignored the call from the city’s embattled leader to end the escalating sit-in and brushed off Beijing’s branding of their demonstrations as “illegal”.

“The past few days have been the best and the worst that I’ve seen,” said Law Yuk Kai, who has been a human rights monitor for 20 years in Hong Kong.

“The younger generation has a very critical mind which is reflected in these protests. Unlike the previous generation who were mostly refugees, the youth are really Hong Kongers,” he said.

There was a carnival-like atmosphere in the streets Tuesday night but also increasing calls for demonstrators to show greater seriousness, with organisers urging participants not to drink alcohol.

One sign sternly reminded the student-dominated crowds that the rallies were “a protest, not a party”, while another drew sombre parallels with the 1989 demonstrations in Beijing’s Tiananmen Square, where weeks of peaceful protests were crushed by the Chinese military.

“The government has lost, they just don’t know it yet,” student Kelvin Yip told AFP.

Others questioned the protesters’ ability to sustain momentum.

“We will have more people come out for the holidays, people that were too busy will join,” said protester Emma So.

“I don’t know what will happen after, especially for older people, it’s hard to protest night after night.”

Beijing has been left grappling with one of the biggest challenges to its rule over the semi-autonomous city at a time when the Communist Party is cracking down hard on dissent on the mainland.

In his first public comments since demonstrators were tear-gassed by riot police on Sunday evening, chief executive Leung on Tuesday said the sit-in — organised partly by the Occupy Central group — was now “out of control” and asked them to “stop this campaign immediately”.

But protest leaders rejected Leung’s demands and renewed calls for the Beijing-backed leader to step down.

The most intense civil unrest Hong Kong has experienced since its 1997 handover from British rule was sparked by Beijing’s decision in August to restrict who can stand for the city’s top post.

British Deputy Prime Minister Nick Clegg said he would summon China’s ambassador to London to express his “dismay and alarm” about the refusal to grant free elections.

Hong Kongers will be able to vote for their next chief executive in 2017 but only two or three candidates vetted by a pro-Beijing committee will be allowed to stand.

Protesters have two demands — that Leung step down and Beijing rescind its insistence that his successor be vetted.

“If the government does not respond after October 2, the action will inevitably be stepped up,” said Alex Chow, chairman of the Hong Kong Federation of Students.

Influential student leader Joshua Wong, who was detained by police last week, said Hong Kong’s leader was the “only one” who could end the protest.

“Everyone here has the power. We’re here for the bargaining chip with Beijing,” he said.

But Beijing stayed defiant Tuesday, saying it supported Hong Kong’s handling of the protests, while analysts said the chances of a climbdown by the Chinese government were virtually non-existent.

Hong Kong authorities are caught between protester demands, Beijing’s uncompromising stance and efforts to keep the city running, as business leaders complain that the protests are hitting the economy.