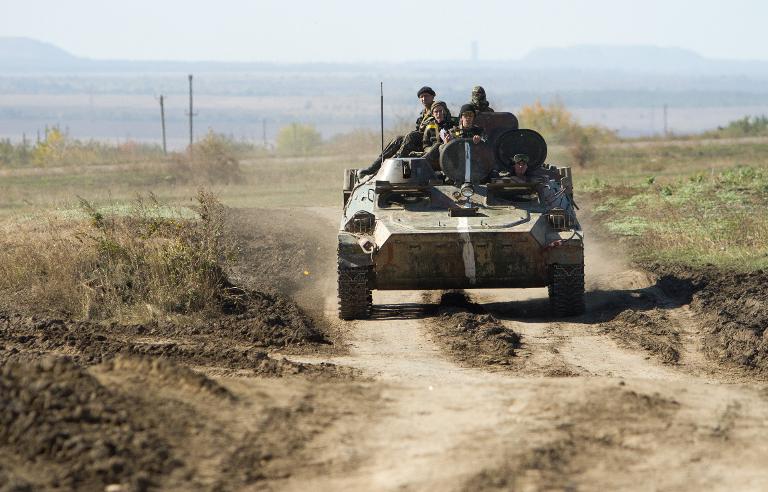 Ukraine’s truce and troops withdrawal deal lay in tatters Tuesday after the deadliest wave of attacks by pro-Russian insurgents in more than a month left nine soldiers and four civilians dead.

Thirteen soldiers and civilians were killed in 24 hours, officials said Monday, in the worst violence since the government and pro-Russian insurgents struck a shaky truce in their five-month conflict.

The European-brokered peace deal finalised a week ago in Minsk commits the Ukrainian army and rebels to cease fire and to separate themselves with a 30-kilometre (18-mile) buffer zone.

The insurgency has already killed more than 3,200 people according to UN figures and, despite the deal, a lasting solution seems no closer.

Three civilians were killed in the main rebel stronghold of Donetsk, and another local person died in Makiyivka, a city just northwest of Donetsk, when a shell hit a residential house, local officials said.

Military officials said Monday that separatists with tanks staged repeated attacks on the airport outside Donetsk, a strategic flashpoint, which were repelled by the army, despite losses.

Ukrainian President Petro Poroshenko stressed that the army would continue fighting if the insurgents failed to silence their guns and announced Sunday that the army had created a “reliable frontline” in the east.

A Russian army delegation of some 70 people arrived last week in eastern Ukraine, headed by the deputy commander of Russian ground forces, Alexander Lentsov. Several members of the delegation travelled to Donetsk to urge the separatists to respect the truce.

“We are going to convince (the rebels), use reason with them. That is the most important thing,” Lentsov told Ukrainian television at the weekend, in rare public remarks by a Russian military commander.

Moscow denies having sent regular troops to eastern Ukraine, but Kiev argues that large contingents of soldiers and heavy equipment from Russia were behind a rebel offensive last month that seized control of a chunk of territory and forced the government to agree to the ceasefire.

The five-month conflict between Kiev and the separatists of Lugansk and Donetsk has prompted Western states to impose unprecedented sanctions on Russia, whose economy is already flatlining.

On Monday, German Chancellor Angela Merkel said that “if there is a continued violation of basic principles” in the ceasefire, Europe may have to go further and rethink its strong dependence on Russian energy supplies.

For the time being, “there is currently no way to remove the existing sanctions. Rather it is still necessary to continue the pressure within a reasonable political process,” she said.

For its part Moscow announced an investigation into alleged “genocide” of Russian-speaking people by Kiev’s forces in the east.

The Investigative Committee, Russia’s main crime-fighting body that normally does not have jurisdiction outside the country, announced the probe Monday, saying Ukrainian forces were responsible for killing at least 2,500 people and destroying more than 500 civilian buildings.

The splintered country’s election season kicks off Tuesday, the final day of registration for Ukraine’s snap parliamentary polls on October 26.

Poroshenko last month called the polls as a way of restoring public trust in the parliament, which was previously dominated by corruption-tainted allies of ousted president Viktor Yanukovych.

The rebels say they will boycott the ballot and hold their own votes on November 2.

In a symbolic act of defiance against Russia, activists in Ukraine’s second biggest city of Kharkiv toppled the country’s largest statue of Bolshevik revolutionary Vladimir Lenin in the main square on Sunday.

Statues of Lenin, seen as symbols of the totalitarian Soviet past, were toppled throughout central Ukraine, including Kiev, during last winter’s pro-Europe protests, which led to the ouster of the Russia-leaning Yanukovych.