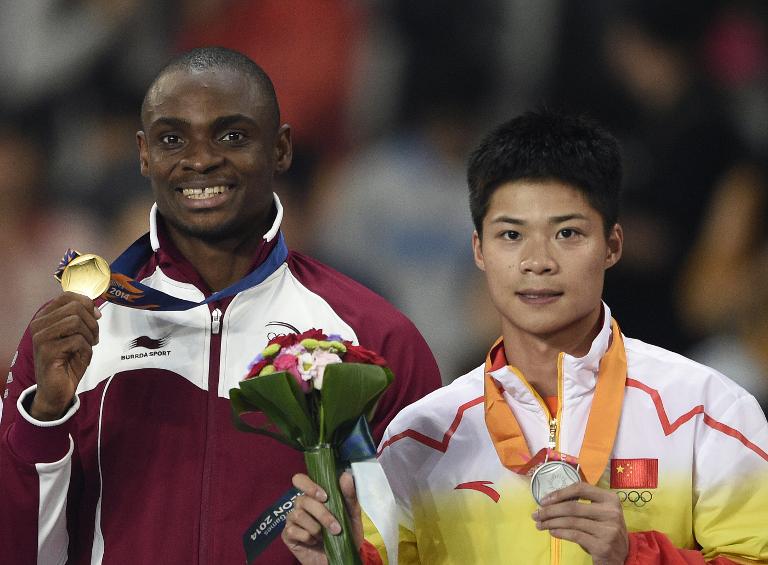 Chinese athletes aim to show their class in the Asian Games track and field on Tuesday after a row over talented imported from Africa.

Li Jinzhe leads the field in the men’s long jump, and he appears well placed to set a new Asian record on day three of the athletics competition.

As day 11 gets underway, China lead the way on the medals table with 112 gold medals from a possible 282, 68 ahead of second-placed hosts South Korea.

Qatar’s Nigeria-born Femi Ogunode relegated China’s Su Bingtan and Kei Takase of Japan to second and third as he set an Asian record 9.93sec in the men’s 100m.

And teenager Ruth Jebet, who switched from Kenyan to Bahrain nationality last year, won the women’s 3,000m steeplechase ahead of China’s Li Zhenzhu.

But the Asian power will expect to grab gold through Xia and Li on day four of the athletics competition at Incheon Main Stadium.

Xia, heir to former world record-holder Liu, is the man to beat in the sprint hurdles after setting a personal best of 13.23sec this year.

His personal best of 8.47, already more than 30 centimetres over the Games record, is just one centimetre shy of Asia’s best set by Saudi Arabia’s Mohamed Al Khuwalidi in 2006.

Hosts South Korea and North Korea play Thailand and Iraq respectively as they aim to set up an emotional men’s football final between the technically warring states.

India’s multiple world champion Mary Kom is up against Vietnam’s Le Thi Bang in the women’s 51kg semi-finals as she goes for Asian gold.

“It’s going to be another tough match because he is a great player. We both should be happy, win or lose because we are representing our countries and will get medals,” said Lu.

“But of course my goal is to win.”

Hong Kong take on Malaysia and Sri Lanka play South Korea for a place in the men’s cricket semi-finals.

There are also medals in mountain biking, bowling, wrestling and equestrian in venues scattered around South Korea’s third city, west of Seoul.