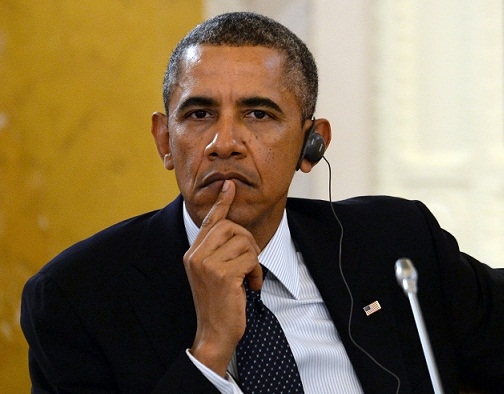 Damascus: President Barack Obama has admitted that the US underestimated the threat posed by Islamic State fighters in Syria, as US-led coalition warplanes pounded the oil sites that fund the jihadist group on Sunday.

Late Sunday coalition planes hit the entrance to the country’s main gas plant, in an apparent warning to IS militants to abandon the premises under their control, a monitor said.

“The international coalition has for the first time struck the entrance and prayer area of the Coneco gas plant. It is under IS control, and is the largest in Syria,” said Syrian Observatory for Human Rights director Rami Abdel Rahman.

Up until Sunday, the strikes had targeted mainly jihadist bases and makeshift oil refineries used by the militants, in a bid to weaken one of their main sources of financing.

Obama said that former Al-Qaeda fighters driven from Iraq by US and local forces had been able to gather in Syria to form the newly dangerous Islamic State group.

“I think our head of the intelligence community, Jim Clapper, has acknowledged that they underestimated what had been taking place in Syria,” Obama said, referring to his director of national intelligence.

Asked whether Washington had also overestimated the ability or will of Iraq’s US-trained military to fight the jihadists on its own, Obama said: “That’s true. That’s absolutely true.”

US-led coalition planes pounded oil sites in Syria Sunday that fund the IS group, as Syria’s Al-Qaeda branch warned that people in Europe and America would pay the price.

US, along with coalition partners Saudi Arabia and the UAE, targeted four modular refineries and an IS command and control post, all north of Raqa in Syria, US Central Command said.

“Initial indications are that they (the strikes) were successful,” it said.

In his first speech since air raids were launched on Syria, the head of the Al-Qaeda affiliate there, Al-Nusra Front, warned of reprisals.

“Your leaders will not pay the price for the war alone, you will pay the higher price,” Abu Mohammad al-Jolani said in an Internet audio message, addressing “people of America and Europe”.

Failure to stop these air strikes “will transfer the battle to your very homes”, he said.

Washington has said it would press on with “near continuous” strikes, and the latest raids were part of intensifying efforts to disrupt the group’s lucrative oil-pumping and smuggling operations.

The jihadists control a swathe of territory straddling northwestern Iraq and eastern Syria, home to most of Syria’s main oilfields, and their oil infrastructure is the main target of the air strikes.

Experts say the jihadists were earning as much as $3 million (2.4 million euros) daily from oil before the coalition began launching strikes on Syria, building on the air war under way against IS in Iraq since August 8.

At least 57 Al-Nusra fighters have been killed in the air campaign.

Washington has made a distinction between the wider Al-Nusra Front and a cell of foreign fighters dubbed the Khorasan Group that it says was plotting attacks against the US.

Muhsin al-Fadhli, a long-standing Al-Qaeda operative and alleged Khorasan leader, was reportedly among those killed.

The allies had “committed a horrible act that is going to put them on the list of jihadist targets throughout the world,” Al-Nusra spokesman Abu Firas al-Suri warned in an online video message on Saturday.

Meanwhile, Kurdish fighters from northern Iraq have begun training in Germany on handling weaponry supplied by Berlin to support the battle against IS.