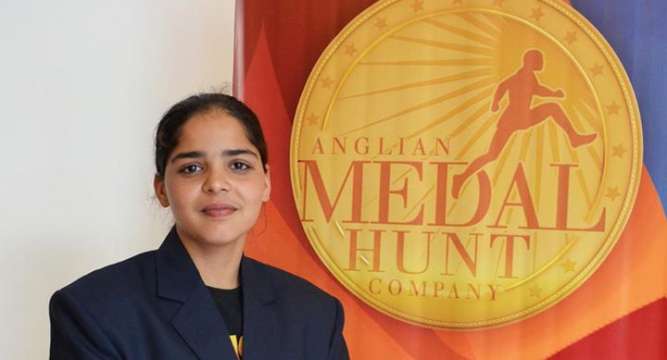 The 21-year-old from Amritsar clocked 1:33:07 to improve on her previous personal best of 1:33:37, which was also the national record, to finish second at the Marathon Course here.

Khushbir was a little over two minutes behind gold-medallist Lu Xiuzhi of China, who clocked 1:31:06.

The Indian was consistently third till the 18km mark before going up a position in the final two kilometres, thanks largely to the slowing down of second-placed Chinese Nie Jingjing, who eventually finished fourth.

The bronze medal went to local favourite Jeon Yeongeun, who also clocked a personal best of 1:33:18.

This is the biggest triumph of Khushbirâ€™s nascent career after the bronze medal she won at this yearâ€™s Asian Walking Championships bronze in Japan. She was the first Indian woman to achieve such a feat.

Khushbir burst into the scene after winning a bronze medal in the 10,000-metre walk race at the 2012 Asian Junior Athletics Championships in Colombo.

From the time her father died in 2000, life took an unkind turn. Brought up in a remote village in Punjab, Kaur’s story is straight out of a Bollywood movie. Her mother sacrificed her entire life to feed three daughters and a son.

On Sunday, when Kaur crossed the finish line to win the silver medal in the 20 kmÂ racewalking event, she virtually brought down the curtain on an impoverished life.Â

“The dream of my mother (Jagbir Kaur) has come true,” she told DNA, proudly displaying her medal. “It’s all because of my mother,” she added. Her moist eyes said it all. “She made so many sacrifices to raise us. You can’t comprehend it. It was my mother who pushed me to take up sport. Today, all that I have achieved is because of her,” Kaur added.

Initially, life wasn’t all that difficult initially for these four kids. “We came from a well-to-do family but after my father’s death 14 years ago, life became very difficult.”Â Kaur’s mother worked in several households in Arslapur village (AmritsarÂ district) to earn a living and feed her children. “She never deprived us of anything. Even though my mother is illiterate, she ensured her children went to school,” Kaur said. Her elder sister hold a masters; another is doing B.Ed.

“I was inclined towards studies. But my mother told me to take up this sport and I started training with coach Baldev Singh,” she said.Â Kaur did well at the state and national levels. But as she joined the national camp and started training under foreign coach Alexander Artsybashev of Russia in 2011, her performance improved rapidly. She has broken the national record four times in the last three years.