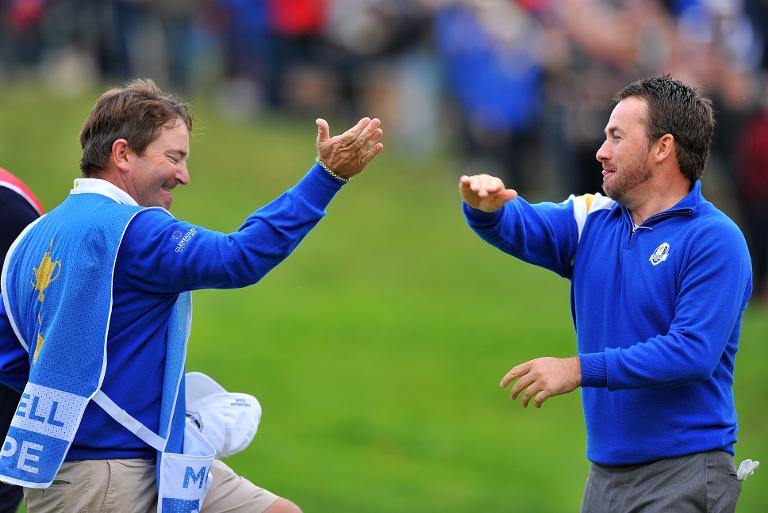 Europe’s finest golfers defeated the United States for the sixth time in seven tries Sunday to retain the Ryder Cup, delivering a resounding 16 1/2 to 11 1/2 beating to the once-dominant Americans.

Welshman Jamie Donaldson, a 38-year-old Ryder Cup rookie, dropped his approach at the 15th hole just inches from the hole to clinch a 4 and 3 victory over Keegan Bradley that gave Europe an unbeatable total of 14 1/2 points at Gleneagles.

“Hit the wedge of my life to close the game out,” Donaldson said. “You can’t really put words to it. It’s unbelievable.”

Europeans matched their longest win streak in the series with a third consecutive triumph while Tom Watson’s US squad failed in its bid for a first victory in Europe since Watson captained a 1993 triumph at The Belfry.

“Proud is the first word,” European captain Paul McGinley said. “It has been a huge team effort.”

Trailing 10-6 when Sunday’s 12 final singles matches began, the Americans needed the greatest rally ever on European soil to pull off a stunner in Scotland.

Instead, Europe emerged with the trophy for the eighth time in 10 starts.

“It’s amazing,” Donaldson said. “Everybody played so well to retain the Cup. That’s what it’s really all about.”

A halved match by England’s unbeaten Justin Rose, who won three and halved two to lead all point producers, put Europe on the brink.

Attention then turned to Donaldson, who had birdied to win the ninth, 11th and 12th holes for a 4-up lead over Bradley, who sank a short putt to halve 13 before Donaldson, who had to play the Czech Open in the penultimate week of qualifying just to seal a spot on Europe’s team, halved 14 and 15 to seal America’s fate.

“It’s a pretty incredible experience for me to get on the team and then be part of a winning team,” Donaldson said. “It has been an amazing few weeks.”

Americans lead the overall series 25-13 with two halved, but Europeans have a 10-7 with one halved edge since the team was expanded beyond British-Irish talent in 1979.

“They played better than we did,” said Watson. “It would have been a tough go to beat them but we came in thinking we could. It just didn’t work out.”

Europe built a four-point lead entering singles thanks to a 7-1 foursomes edge, equalling the 1975 US squad for the format’s most lopsided domination.

“You killed us in the foursomes, man,” Watson told McGinley.

World number one McIlroy, coming off major wins at the British Open and PGA Championship, won 5 and 4 over Rickie Fowler, a top-fiver in every major this year but winless in eight Cup matches.

“It would be nice to get a win one day soon,” Fowler said.

McIlroy opened birdie-eagle-birdie for a 3-up lead, birdied the fifth and sixth to go 5-up, lost the seventh with a bogey but won 13 with a birdie and halved 14 to win.

“Very satisfying. I knew what was expected of me and what I expect of myself,” McIlroy said. “I was probably more up for this day than I was the last day of the majors I won. There for no option other than to win.”

McDowell, McIlroy’s Northern Ireland compatriot, rallied from 3-down at the turn to beat US rookie Jordan Spieth 2 and 1 and finish 3-0 in the event, his first perfect Cup run.

“I just got off to such a slow start,” McDowell said. “I dug in. We halved eight and nine on birdies and I felt something turn inside me. I was happy to come out and get that big point.”

Patrick Reed edged fifth-ranked Henrik Stenson 1-up for the first US point, the Swede missing a four-foot birdie putt at 18 to ensure Reed 3 1/2 points — a team high and the most by a US rookie since 1979.

But Germany’s Kaymer answered by chipping in for eagle to win the par-5 16th and beat reigning Masters champion Bubba Watson 4 and 2.

“I played very well,” Kaymer said. “To chip it in like this is amazing. It’s a big rush.”

But Hunter Mahan, 4-up after six holes, took bogey at the last to halve with Rose, who won four holes in a row starting at eight to battle back.

“He threw it all at me and I was able to respond,” Rose said. “An honourable half.”

After the Cup outcome was no longer in doubt, Spain’s Sergio Garcia and US rookie Jimmy Walker won while England’s Ian Poulter halved with Webb Simpson and Frenchman Victor Dubuisson halved with Zach Johnson to create the final margin.