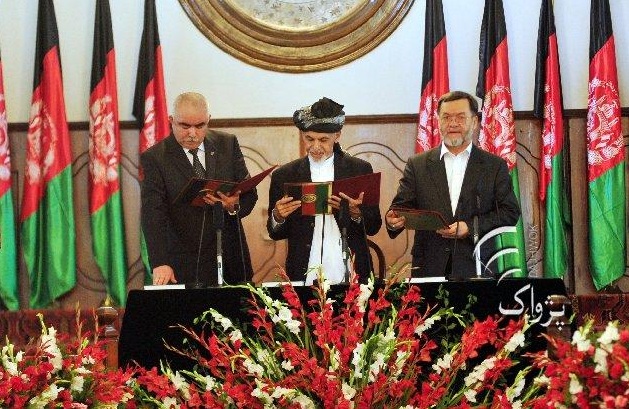 Kabul: After six months of political deadlock, Ashraf Ghani Ahmadzai was sworn in as Afghanistan’s president in a ceremony at the presidential palace in Kabul on Monday.

Amid a bitter dispute over electoral fraud and a recount of votes the US brokered a unity deal between Ghani and the runner-up Abdullah Abdullah, which will see the latter take the role of chief executive. Â

The Taliban have described the deal as a “US-orchestrated sham” but Ghani hailed it as a “big victory”. He is replacing Hamid Karzai in the countryâ€™s first democratic transfer of power since the 2001 US-led invasion toppled the Taliban.

Ghani took an oath to abide by the constitution at the swearing-in ceremony and praised the country’s “first democratic transfer of power”, speaking warmly of his rival, and now partner in government, Abdullah.

â€œI swear in the name of God the almighty to obey and support Islam, and the constitution,â€ Ghani said in the official oath. â€œI will protect the national sovereignty.â€

Abdullah said the two leaders would work together “for a better future with trust and honesty”.

Nearly 1,400 national and international dignitaries, including more than 200 delegates from the US, China, Pakistan, India and other countries, participated in the ceremony.

Security personnel were deployed along the roads leading to Kabul to check all cars and vehicles entering the city.

In a speech as the ceremony began, outgoing President Hamid Karzai, who has been leader since the US-led invasion in 2001, called for people to support the new government.