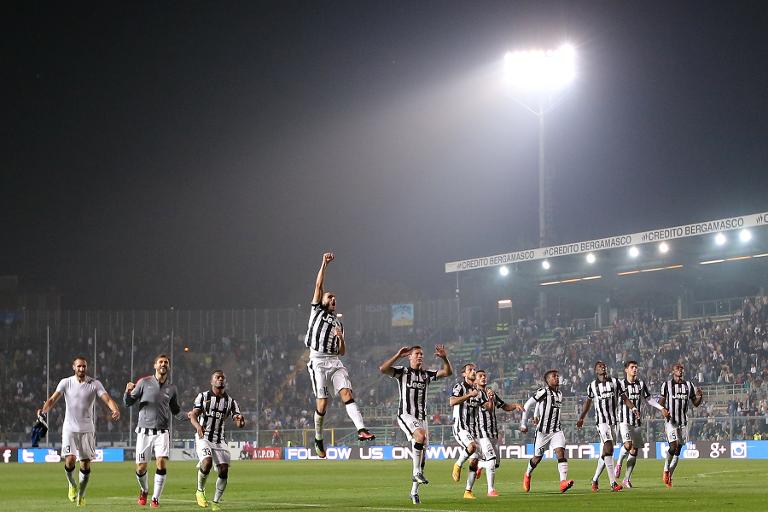 Defending champions Juventus maintained their narrow advantage over Roma at the top of Serie A with a 3-0 win at Atalanta on Saturday evening.

Argentine striker Carlos Tevez was the inspiration for Massimiliano Allegri’s men as he struck either side of half-time to move top of the scoring charts in Italy with his third and fourth goals of the campaign as Juve responded to Roma’s 2-0 win against Hellas Verona earlier in the day.

Alvaro Morata headed home a late third with seven minutes left of a match that hinged on a missed penalty by the hosts with the score at 1-0.

Both Juventus and Roma, the favourites for the title, improved their record to five wins from five, with a two-goal advantage keeping the Turin club top on goal difference.

Juventus are away to Spanish champions Atletico Madrid in Champions League action on Wednesday while Roma travel to Manchester City 24 hours earlier.

The leading duo then meet in a top-of-the-table clash at the Juventus Stadium next Sunday.

Tevez, who was left out of the Argentina squad for upcoming friendlies against Brazil and Hong Kong by new coach Gerardo Martino, again showed the class that made him a three-time South American player of the year.

A close-range finish put the visitors in front on 35 minutes before the turning point of the match on the hour mark.

Giorgio Chiellini gave away a penalty and a golden chance for Atalanta to equalise but Gianluigi Buffon easily saved German Denis’s weak low spot-kick to maintain his record of not having let in a goal this season.

From Buffon’s clearance, Juventus marched down the pitch allowing former Manchester United defender Patrice Evra to set up Tevez, who drove a low shot inside the post from just outside the box.

Earlier, Rudi Garcia’s men also made it five wins on the trot, but were pushed all the way by Verona before Italian international Alessandro Florenzi struck a sweet opener with 15 minutes remaining.

Mattia Destro then fired home a looping shot from just inside the Verona half, a spectacular effort that sent the away side to their first defeat of the season after opening with two wins and two draws.

It was also the perfect result for Francesco Totti, the Roma legend who has scored 235 goals in 21 seasons for the club, and celebrated his 38th birthday on Saturday.

“We did well to be patient and, in big matches like this, it is important to start well which is what we did,” said Garcia.

“We needed to get more shots on target but I told them at half-time to be more efficient and wait for the right moments.

“When you have more than 20 shots, sooner or later you will score and we got the win thanks to big goals from Florenzi and Destro,” added the Frenchman.

Verona, the champions in 1985, remain sixth, but are now seven points behind Juventus and Roma.

“There was class and instinct to Destro’s goal. Immediately after he controlled the ball with his chest, he let go with a long shot and it was the skill of a pure striker,” said the former Lille coach.

There will be six matches on Sunday, including fourth-placed Inter Milan at home to rock bottom Cagliari, while Udinese, who came into the weekend in third spot, are not in action until Monday when they host Parma.