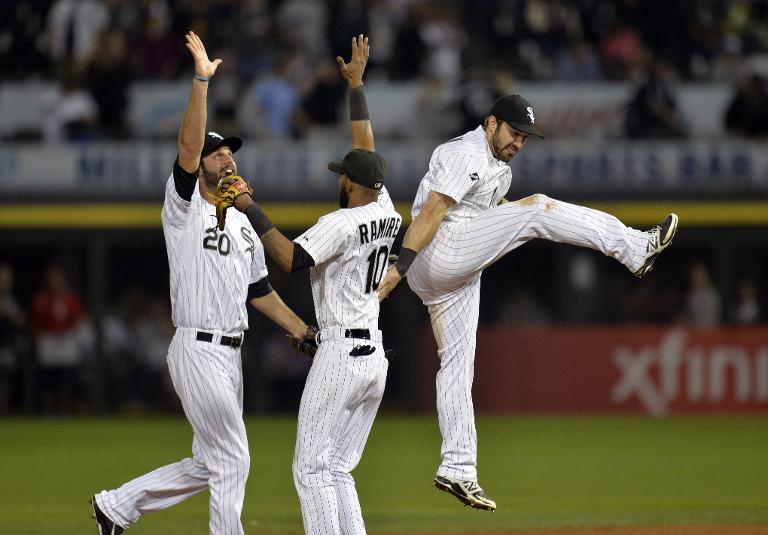 The Chicago White Sox prevented the Kansas City Royals from moving into a tie for the division lead with a 5-4 win behind the bat of Josh Phegley.

Phegley blasted two home runs to keep the Royals a game adrift of the Detroit Tigers in the American League Central Division.

Kansas City has already secured a spot in the postseason but a victory — combined with a Tigers’ loss to Minnesota on Sunday — would force a tie for the division title.

“It is all going to come down to (Sunday). We will see what happens,” said Kansas City manager Ned Yost.

Because of Oakland’s 5-4 loss to Texas, Kansas City is guaranteed a home game in the wild card round if it does not win the division.

If the Royals and Tigers finish with the same records, a tiebreaker would be played Monday at Detroit to determine the division champion.

Jose Abreu hit a two-run homer and Alexei Ramirez drove in a run for the White Sox, who halted a four-game losing skid.

Chicago pitcher John Danks again kept the Royals guessing, holding them to two runs on five hits over seven innings. In 16 career starts against the Royals, Danks is now 7-0.

“He’s got our number right now, that dirty rat,” said Yost of Danks.

Salvador Perez homered, while Nori Aoki, Lorenzo Cain and Mike Moustakas each knocked in a run for the Royals.

“We definitely let one get away,” said Royals infielder Eric Hosmer. “We had a lot of opportunities, guys on base to start innings. But we just didn’t get it done.”

Meanwhile in Seattle, Austin Jackson’s extra-inning leap of faith kept the Seattle Mariners in the AL wild-card race heading into the final day of the Major League Baseball regular season.

Jackson’s desperate lunge toward the first base bag beat the throw and allowed Brad Miller to score the game-winning run in the bottom of the 11th inning for Seattle who eased past the Los Angeles Angels 2-1.

The Mariners were unable to take advantage of a bases-loaded, no-out situation in the ninth.

Miller lined a one-out double down the right-field line off pitcher Mike Morin and Chris Taylor blooped a base hit into centre field to put runners on the corners.

Vinnie Pestano came on to pitch for Morin and Jackson bounced one to Grant Green at second base. Green flipped the ball to second for the force out, but Gordon Beckham’s relay throw to first was too late to catch the speedy Jackson.

“He was indecisive,” said Angels manager Mike Scioscia of Green. “His indecisiveness kept him at a distance from second.”

Seattle is one game behind Oakland for the AL’s final wild card spot. If there is a tie for the second wild card, Seattle will host the playoff at Safeco Field.