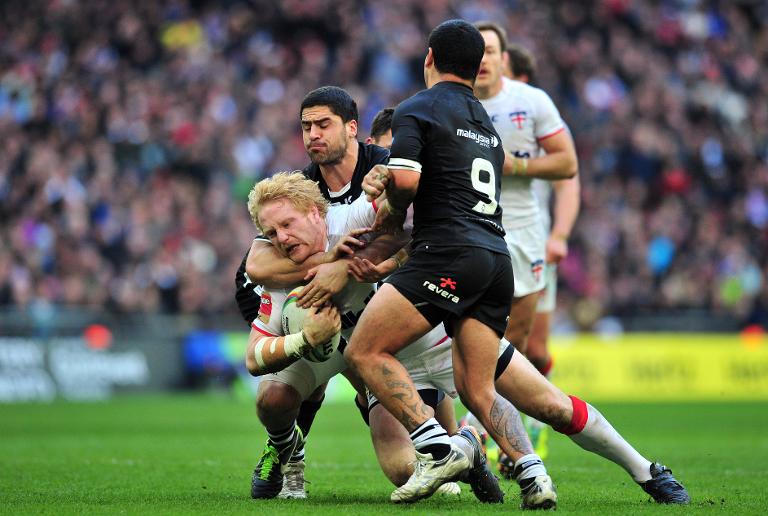 Graham, like Burgess the previous night against the Sydney Roosters, produced a blockbusting performance as Canterbury held out to beat Penrith 18-12 Saturday to advance to the season decider.

The influential English prop was in the thick of the action and scored a try to open the scoring in the first half.

Burgess and Graham have been among the most impressive forwards in the NRL this season and the former St Helens man said he was disappointed when he learned his international team roommate was heading back home to play rugby union.

However, he said it was wrong to suggest he would look to target Burgess more than any other Rabbitohs forward next Sunday.

“I reckon honestly, there is not as much in it as people say,” Graham told reporters.

“I have to do my job for my team and stick to the game plan.”

Burgess negotiated his shock move to Bath during the Rugby League World Cup in England and Wales last year but Graham said he knew nothing about his decision to try his hand at the 15-man game.

“He didn’t mention it to me, it wasn’t until I got back to Sydney that I first got wind of it,” he said.

“As a code (rugby league) we need people like Sam. We need Sonny Bill Williams, Benji Marshall and want them to stay.

“This is not an attack on Sam or those guys, I love rugby league and I want to see the best athletes playing it.

“It happens in England too. There are a huge number of outside backs produced by rugby league and then snapped up by rugby union.”

Graham said he was intrigued by the media interest in his country of birth and said it was something never discussed in the Bulldogs dressing room.

“It doesn’t matter where I am from, I am an Englishman, but I am a rugby league player,” he said.

“There are people in our team from all walks of life like Tonga, New Zealand, Queensland, NSW, city, country.

“I am just from a different part of the world geographically, but people want to talk about it all the time.

“But the NRL at home is held in such high regard and I would look at (Greg) Inglis and (Jarryd) Hayne on the highlights packages and think ‘how can I go over there and play?’.

“It’s pleasing to see English lads come here and hold their own.”