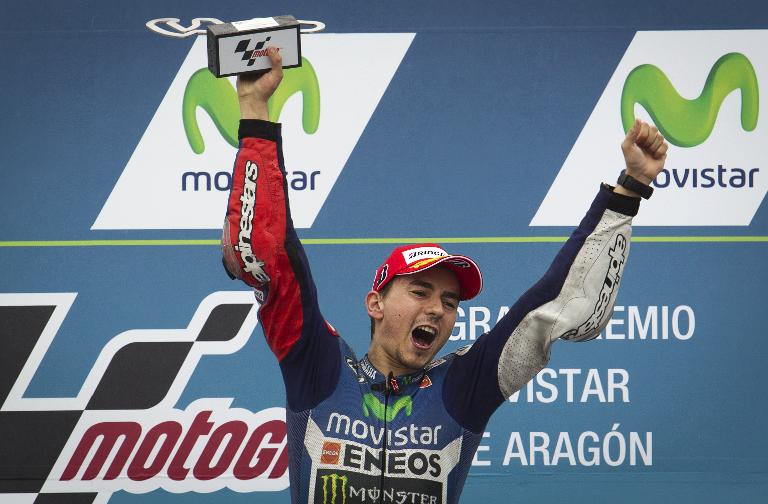 Spaniard Jorge Lorenzo won his first Grand Prix of the season in a thrilling rain-affected race at Aragon on Sunday.

The Yamaha rider’s decision to come into the pits and change bikes with just four laps to go proved correct as he cruised home in the final stages ahead of compatriot Aleix Espargaro with Britain’s Cal Crutchlow in third on a Ducati.

World championship leader Marc Marquez of Spain finished 13th after crashing his Honda in the wet conditions, but still extended his overall lead by a point from teammate Dani Pedrosa as he also crashed and finished 14th.

Lorenzo’s fast start propelled him from the third row of the grid into a fight for the lead with Marquez and Lorenzo.

However, the early stages of the race were also dominated by two huge crashes as Andrea Iannone and seven-time world champion Valentino Rossi flew off their bikes as they came off the track.

Rossi even had to be lifted from the track on a stretcher, but thankfully was able to walk into the medical centre for treatment on minor injuries shortly afterwards.

The rain then became a bigger factor in the final 10 laps and Lorenzo was the first of the leaders to head into the pits to adjust to the conditions.

Pedrosa and Marquez stayed out on the track, but both soon crashed to finish well down the grid which allowed two-time world champion Lorenzo a much-needed win.

“Today’s race was bit dangerous, but we started much better than expected. I was fighting with Marc for the lead and when it started to rain I didn’t feel the same as Dani and Marc,” said Lorenzo.

“I wanted to be more prudent and thought I’ll go for the third place. The first lap after the change was difficult to get the tyres warmed up in the wet and when I passed the home straight it I was said 12th. The next time round it said I was first, so I was a little surprised.

“I tried to make sure I didn’t make any mistakes in the last three or four laps and luckily the sacrifices of the past few weeks paid off.”

Marquez’s surge towards the title was only slightly halted, though, as he now leads Pedrosa by 75 points and could clinch his second world title in as many years as a MotoGP rider at the Japanese Grand Prix in two weeks’ time.

“I didn’t have experience in these conditions with the dry and then wet. I thought I could keep going, but the risk was too much,” said the 21-year-old.

“I need to win (in Japan). The important thing is that there are four races to go and I am close.

“That gives me a lot of confidence and it doesn’t matter if it happens in Japan, Australia or Malaysia, the important thing is to win the title because in the end that is what counts not when you won it.”