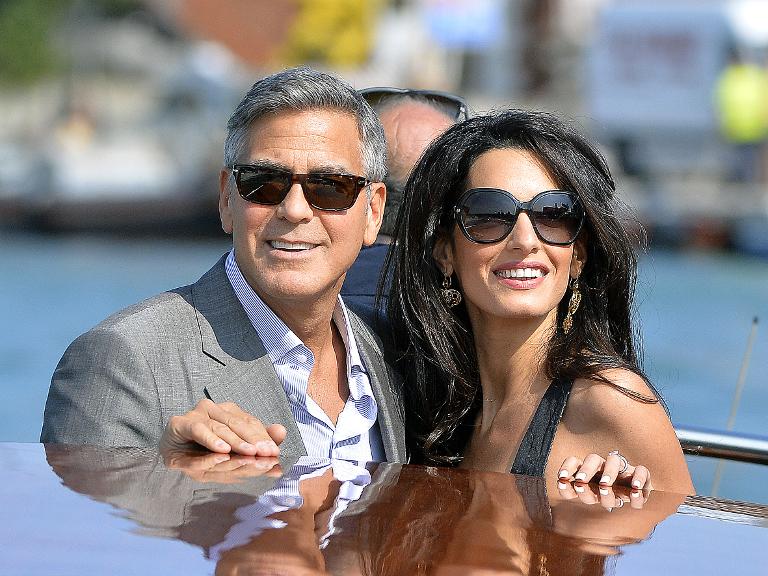 Hollywood heartthrob George Clooney and Lebanese-British lawyer Amal Alamuddin married in Venice on Saturday before partying the night away with their A-list friends in one of the most high-profile celebrity weddings in years.

The announcement came as a surprise as the pair were not expected to officially tie the knot until Monday, though they are still tipped for a civil ceremony at the town hall to officialise the marriage under Italian law.

Earlier in the evening, a euphoric-looking Clooney swept up Venice’s Grand Canal to attend his wedding party, accompanied by some 20 boatloads of paparazzi and the screams of adoring fans.

Hundreds of camera flashes lit the water around him as the world’s most eligible bachelor prepared to break hearts across the world and exchange vows with his beautiful dark-haired fiancee.

The silver-haired actor and director, looking dashing in an Armani tux, grinned and rubbed his hands in glee as he entered the seven-star Aman hotel’s grand entrance to celebrate with Hollywood chums who have flown in from across the globe for the party.

Lebanese-born Alamuddin, who stayed out of sight inside the hotel, looked dazzling in a gown by red-carpet maestro Oscar de la Renta, according to a source.

Matt Damon, Bono, Bill Murray, Cindy Crawford and her husband Rande Gerber — rumoured to be Clooney’s best man — glided up the canal ahead of the groom with dozens of other guests, waving to the crowds and showing off snazzy Versace, Gucci and Prada gowns.

Singing gondoliers, who had spent the day showing off the romantic candle-lit resort to snap-happy tourists, were swept aside in their wake as the world’s most famous waterway erupted with excitement.

Generous George was even thought to have invited his Venetian taxi driver Alessandro Greco along, after he was pictured in a tux hopping out of his boat and entering the Aman with other guests.

Clooney’s 36-year-old bride had been snapped Friday evening in a red gown at a soiree with close friends including actress Ellen Barkin — who threw the human rights lawyer a hen party several weeks ago.

In a Cinderella moment, Alamuddin lost her shoe after the stiletto heel got caught in a gap in the slatted floor in front of the hotel, but she recovered in style.

Tantalising details have emerged of the wedding dinner, with stars reportedly to dine on lobster, wild mushrooms and figs at a banquet fit for the gods.

Clooney said goodbye to bachelorhood Friday night with a stag party at his favourite restaurant, just hours after sweeping into the floating city with Amal aboard a water taxi dubbed “Amore”.

After shaking off the paparazzi, Clooney and his chums headed to Da Ivo near Saint Mark’s Square for the venue’s prized Venetian and Tuscan delicacies.

The feasting continued Saturday evening in the garden of the 450-year-old Palazzo Papadopoli, where guests were met with lashings of bubbly and canapes, including polenta with wild mushrooms and prosciutto ham with figs, according to a source.

The sumptuous five-course dinner was expected to include lemon risotto with lobster and a sea bass main — as well as a wedding cake.

The 53-year-old actor had 100 cases of his own tequila label flown in for his wedding and cracked open bottles of the award-winning tipple at the party after handing one over to thirsty-looking paparazzi loitering outside his hotel earlier in the day.

The Aman’s restaurant was transformed into a nightclub where they were set to dance the night away, with Clooney dedicating the song “When I fall in Love” to Alamuddin.

A string orchestra and jazz trio are also expected to perform a number of songs, including the uber-romantic “Smoke Gets in Your Eyes”, a ballad made famous by The Platters in 1958.

Clooney, who has owned a home in northern Italy for years, was married once before, to “Mad Men” actress Talia Balsam, but the pair split in 1993, just before his breakout role in “ER” propelled him to the status of global sex symbol.

She moved to Britain as a three-year-old.