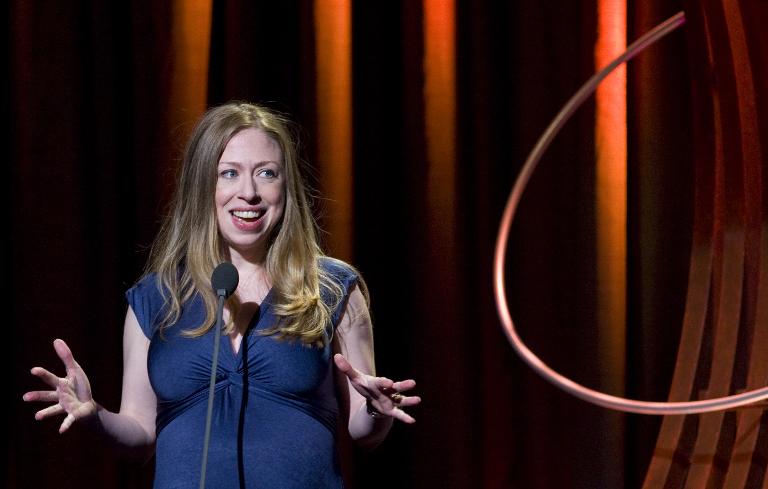 Chelsea Clinton announced Saturday that she had given birth to her first child, daughter Charlotte, thrilling first-time grandparents Bill and Hillary.

“Marc and I are full of love, awe and gratitude as we celebrate the birth of our daughter, Charlotte Clinton Mezvinsky,” Chelsea Clinton wrote on Facebook.

The message was also posted on Twitter, after the baby’s birth Friday, and immediately retweeted by the proud grandparents.

The former first daughter, 34, frequently tipped to follow her parents into politics, left her position as NBC special correspondent in August to focus on her pregnancy and the birth of her daughter.

Clinton announced in mid-April at an event with her mother in Manhattan that she and investment banker husband Marc Mezvinsky were expecting their first child.

Former president Bill Clinton and former Secretary of State Hillary Clinton made no secret of their joy at becoming grandparents.

“Charlotte, your grandmother @HillaryClinton and I couldn’t be happier!” he wrote on Twitter Saturday.

Earlier in the day, the Clintons announced that baby Charlotte was born late Friday, declaring that they were “blessed, grateful and so happy.”

“We are thrilled to be with our daughter and her husband as they welcome their daughter into the world,” they said in a statement.

“Chelsea is well and glowing. Marc is bursting with pride. Charlotte’s life is off to a good start.”

The baby had been so highly anticipated that even President Barack Obama cracked jokes this week while attending a Clinton foundation event in New York, offering his motorcade if needed to speed through the Big Apple’s gridlock to give birth.

Obama teased the anxious grandparents-to-be — at the same time tweaking New Yorkers who chafe at traffic nightmares brought on by the annual United Nations General Assembly.

“I was just discussing with president Clinton — if Chelsea begins delivery while I am speaking, she has my motorcade and will be able to navigate traffic,” Obama said, drawing chuckles at the Clinton Global Initiative meeting.

“Actually, it’s pretty smooth for me during the week. I don’t know what the problem is — everybody hypes the traffic…. I haven’t noticed.”

As the due date approached, Hillary admitted she was calling her daughter “every five minutes” to get an update.

Bill spoke of high hopes for his future grandchildren earlier this week.

“I want them to really love being alive,” he said, adding “and when they grow up, I want them to believe they have certain obligations to people who don’t have all the opportunities they’ll have and to the larger society.”

Chelsea Clinton began work as a special correspondent with NBC in 2011. Reports of her $600,000 salary sparked a backlash earlier this year, fueling complaints that it was grossly inflated pay for comparatively little work.

Educated at Stanford, Columbia and Oxford Universities, she runs the Clinton Foundation with her parents Bill and Hillary.

Her mother Hillary is widely anticipated to launch a second bid to become the first woman president of the United States in 2016.