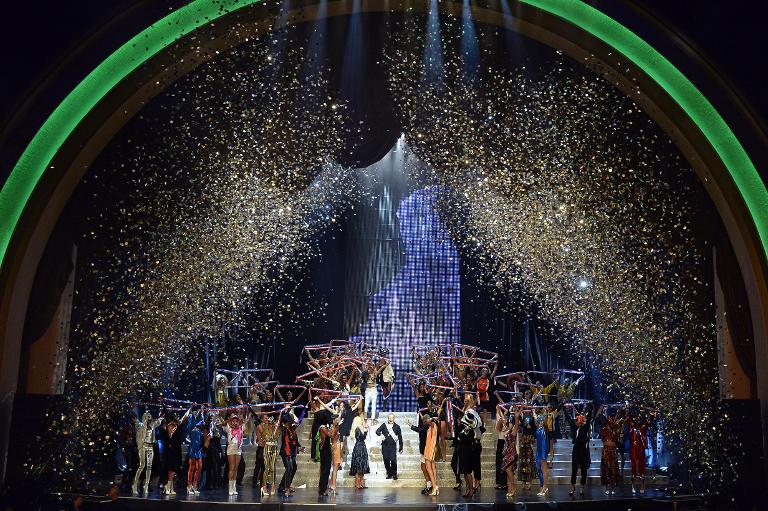 The champagne flowed, along with the tributes, on Saturday as irrepressible fashion designer Jean Paul Gaultier slathered his last ready-to-wear show in bucketloads of his famously wacky sense of humour.

Celebrities including French actress Catherine Deneuve and British pop singer Boy George fought their way through hordes of onlookers outside the Grand Rex cinema in central Paris to reach the much-anticipated fashion extravaganza.

And in a show that was classic Gaultier, the flamboyant showman of Paris fashion delighted his audience with a beauty-pageant theme that provoked cheers, whoops and roars of laughter.

Cards on guests’ seats welcomed them to the “election of Miss Jean Paul Gaultier 2015” and thanked everyone who had supported him over the years with special mentions for “Miss Footballer’s Wife”, “Miss Fashion Editor” and “Miss Tour de France”, all of whom he gently sent up during the show.

The event had been the must-have invitation of the current Paris fashion week since Gaultier announced his decision to quit ready-to-wear and concentrate on couture nearly two weeks ago.

The former enfant terrible of French fashion — regarded by many as the designer who “wrote the rules” on ready-to-wear — is known worldwide for his outlandish imagination, designing Madonna’s cone-shaped bras and putting real people on the catwalk.

The 62-year-old Frenchman is also famed for the cult “Eurotrash” programme he presented with Antoine de Caunes on British television in the 1990s.

Gaultier earlier this month cited the hectic pace of the modern fashion industry for his decision to bow out after nearly 40 years.

Appearing on stage after the show, the designer was virtually mobbed by friends and well-wishers wanting to pay tributes to him.

“It’s very nice, it’s beautiful. I think it was a beautiful show. I am very happy it succeed very well,” a delighted-looking Gaultier told AFP, speaking in his trademark rapid-fire, slightly ungrammatical English.

“I feel very happy, we will see what else, a lot of thing, a lot of other projects but for today, it’s marvellous and super, super happy,” he added.

The collection, crammed with Gaultier signatures such as stripes and corsets and accompanied by a largely 1980s soundtrack, marked the end of an era in fashion.

The designer, considered one of France’s all-time most talented designers, got his start in fashion as an assistant to Pierre Cardin in 1970.

He launched himself in ready-to-wear in 1976 at a time of high creativity for the industry and later moved into couture in 1997.

Donald Potard, a childhood friend and Gaultier’s former business partner of 40 years, said he had been saddened but not surprised by Gaultier’s decision.

Potard, who is no longer close to Gaultier since splitting in 2005, recalled how as a schoolboy Gaultier would put on his own amateur fashion shows twice a year.

“Jean Paul was always an innovator… He was designing all the time,” he told AFP earlier this week.

“It bored me stiff because I preferred to play with my electric trains. But the way he did it was so exciting that it became amusing and interesting for me,” he said.

Gaultier said earlier his decision to stop ready-to-wear had been taken after an “in-depth assessment” of the future of his eponymous fashion house in which Spanish fragrance and fashion group Puig has a majority stake.

“For some time, I have found true fulfilment in working on the haute couture, and it allows me to express my creativity and my taste for research and experimentation,” he was quoted as saying by industry journal Women’s Wear Daily.

“Commercial constraints, as well as the frenetic pace of collections, don’t leave any freedom, nor the necessary time to find fresh ideas and to innovate,” he said.

“I will be able again to express my creativity without constraints,” he added.