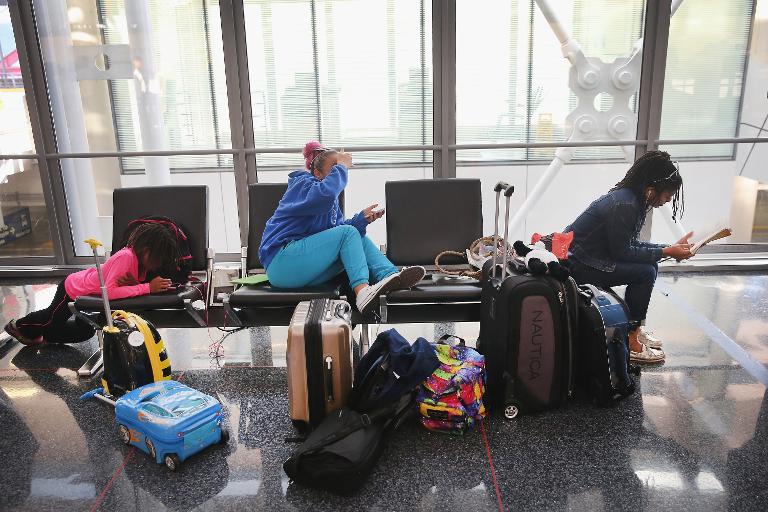 Hundreds of flights were grounded at two major Chicago airports after an employee at an air traffic control center lit a fire and tried to commit suicide, officials said.

Air transit into and out of the city’s bustling O’Hare International and Midway airports was completely shut down as a result of the blaze at the Federal Aviation Administration’s facility in the town of Aurora, Illinois.

Almost 2,000 flights were canceled, including more than 1,500 from O’Hare, the airport said, leaving thousands of frustrated passengers stranded and unsure when they’d be able to travel.

According to a federal complaint, 36-year-old Brian Howard had posted a message on his Facebook page saying he was going to “take out” the control center and kill himself.

The complaint says Howard had worked as a contractor for about eight years and that he tried to set a fire in the basement, apparently using a gas can and towels.

Paramedics responding to the scene rescued Howard as he was in the process of cutting his own throat, the complaint states. He was taken to an area hospital.

Authorities told US media that the incident is not being treated as terror-related.

Valerie Jarrett, a senior adviser to President Barack Obama, said federal authorities had joined the probe in the fire, as the resulting delays and cancellations snarled air transit not just in the immediate region, but across the country.

“An investigation is under way between federal, state, and local authorities and we will be hearing more from them as they have results,” Jarrett, who like Obama hails from Chicago, told MSNBC television.

Jarrett warned that with air transit disrupted at one of America’s busiest airports, “there is going to be a lot of inconvenience and it’s very, very frustrating.”

By Friday evening, international flights were being allowed to land and depart from O’Hare, the airport said. It advised passengers planning to fly on Saturday to check their flight status before heading to the airport.

The FAA has not said when normal operations would resume, meaning it could take days for the traffic chaos to return to normal.

The FAA released a statement Friday saying that the fire occurred shortly before 6:00 am. (1100 GMT) in a basement telecommunications room at its Chicago En Route Center.

The aviation radar facility was evacuated and joint investigations were being carried out by the Federal Bureau of Investigations, the Bureau of Alcohol, Tobacco and Firearms and local agencies, as well as the FAA itself.

“Flights that were already in the air destined to the Chicago area were allowed to continue at a reduced rate, or proceed to an alternate destination,” the FAA statement said, adding that it is working with airlines to minimize the inevitable travel chaos.

Authorities said some operations of the FAA’s Aurora center, which is responsible for guiding high-altitude air traffic into and out of the airports, would be taken over by other air traffic sites in the region.

O’Hare, the second-largest airport in the United States, handles more than 67 million passengers each year.