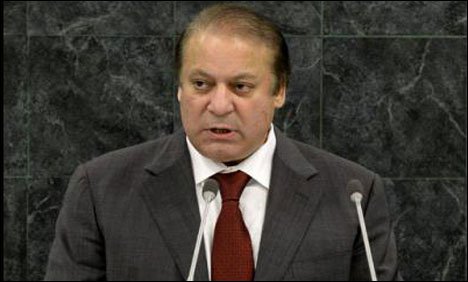 New Delhi: Congress criticised Nawaz Sharif for raising the Kashmir issue in the UN and said his speech had “imprints” of Pakistani military hawks. It said the Prime Minister and his government were “under siege” in Islamabad.

The party said it was “unbecoming” of the Pakistan Prime Minister to rake up bilateral issues at international forum and asserted that Jammu and Kashmir is an integral part of India and is not negotiable.

Underlining that Sharif’s speech had imprints of Pakistani military hawks, Congress spokesperson Anand Sharma said his raising the Kashmir at the UN deserves to be condemned.

“It is unbecoming of a Prime Minister to use an international forum to rake up issues which in fact concern only Pakistan and India,” he said.

The former Union Minister said it is clear that there is “signature, the imprint of hawks of Pakistan establishment, the military establishment on Nawaz Sharif’s statement because he himself, his government is under siege”.

“The only concern we have is about Pakistan-occupied Kashmir where people don’t have freedom, they don’t enjoy their fundamental rights,” he said.

Sharma pointed out that the people of Jammu and Kashmir freely express their views by exercising their right to vote. “They elect their government or remove their government. This is not a freedom that Pakistan-occupied Kashmir has,” he said.

Sharif had raised the Kashmir issue at the UN General Assembly in New York on Friday and blamed India for “another missed opportunity” to address outstanding issues by cancelling the Foreign Secretary-level talks.

Asserting that a “veil” cannot be drawn over the “core” issue of Kashmir, he needled India saying that more than six decades ago, the UN had passed resolutions to hold a plebiscite in Jammu and Kashmir.

India today strongly rejected the “untenable comments” by Sharif on Jammu and Kashmir, asserting that the people of the state have peacefully chosen their destiny in accordance with universally accepted democratic principles.