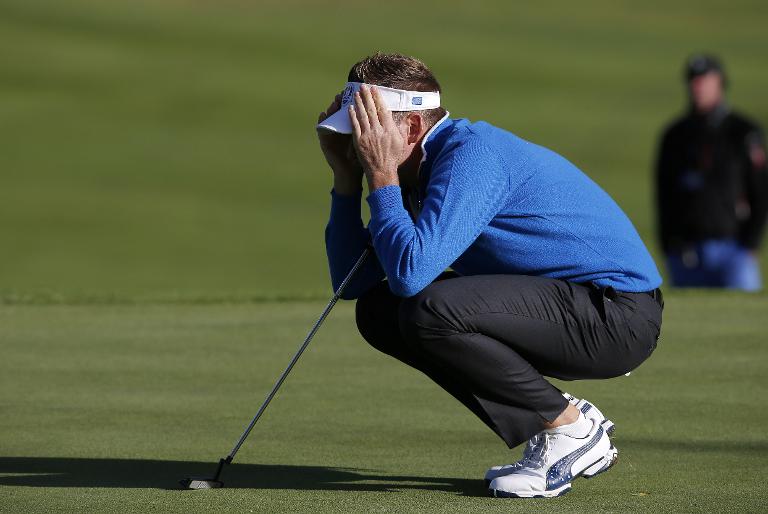 The player who has come to symbolize Europe’s domination over the United States in recent years found himself in harness with Stephen Gallacher on the wrong end of a 5 and 4 thrashing in the opening fourballs at the hands of rookie US pair Jordan Spieth and Patrick Reed.

Gallacher struggled throughout, but so did Poulter, who for the third straight time made it into the Europe team as a captain’s pick.

The Englishman knew he was a target for the Americans, especially due to his extravagent celebrations at Medinah two years ago when he almost single-handedly turned the tide against them.

McGinley now has the task of picking up the pieces for what was one of the few downsides from an opening day’s play that saw Europe bounce back to take a 5-3 lead, with Poulter sitting out the afternoon’s action.

To that end, he decided to send Poulter out on Saturday morning with McIlroy, who was his partner at Medinah when he famously birdied the last five holes of the Saturday afternoon fourballs to open the door for the European team to win the following day.

“Yeah, I put him back with him because he played the senior figure today with Stevie Gallacher and obviously it didn’t go well,” McGinley said.

“And Ian Poulter’s heart is that big, as we all know and that was a real body blow for him to lose a match heavily in a Ryder Cup.

“I just want to bring Ian Poulter back up again and put him on the shoulder of the world’s best player and I know he’ll respond to that.”

Poulter, who will partner McIlory in the last of the fourballs against Rickie Fowler and Jimmy Walker, had said in the buildup to Friday that he relished the role of being the man the American players wanted to down most.

But it all seemed too much for him from the start, missing a three footer for a matching par at the first to fall behind, and he and Gallacher looked well beaten by the turn when they were already four down.

The 38-year-old Poulter, however, said that he was determined to bounce back over the remaining two days of play.

“The Ryder Cup is very black or white. It’s very simple: You lose or you win.

“I said to Stevie walking off the golf course today, when I played with Darren Clarke in 2004, we had our butts kicked the first time I ever played, and obviously we’ve had that today.

“But things can change very quickly and we have to keep our heads up right now.”

The loss came after seven straight wins for Poulter in the Ryder Cup and takes his overall record to 12 wins and four defeats in 16 games.