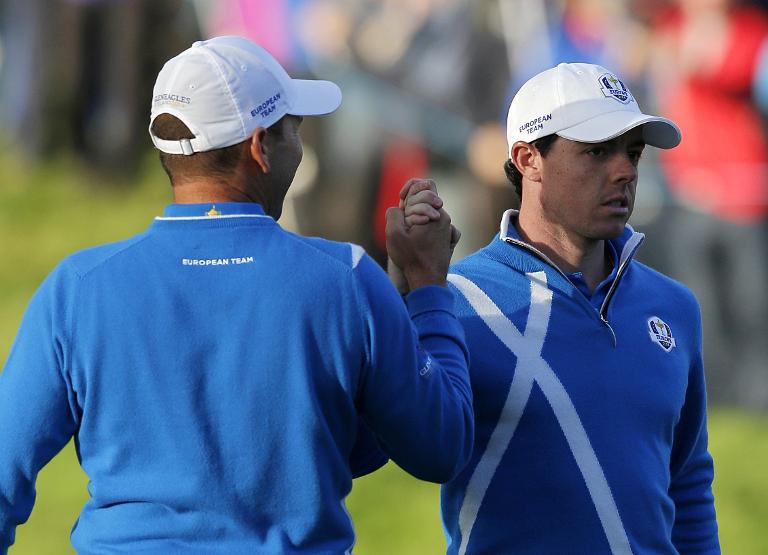 Rory McIlroy and Sergio Garcia saved the best for last to help Europe grab a 5-3 lead over the United States on a pulsating opening day’s play Friday at the Ryder Cup.

The top-ranked player in the world and the number three were staring down the barrel of an embarrassing 0-2 joint deficit at the end of the day.

They lost the morning fourballs on the final hole to Phil Mickelson and Keegan Bradley and McIlroy was standing over a 40-foot putt on the 17th green, needing to sink it to stay alive in the afternoon foursomes against Rickie Fowler and Jimmy Walker.

He duly produced the goods and the European duo then rode their luck at the final hole when McIlroy’s poor tee shot hit a tree and bounced back safely into light rough with a clear view of the green.

Garcia struck a superb 5-wood onto the putting surface and after Walker’s bunker shot came up 18-foot short, the Europeans managed to win the hole and get away with a crucial halve.

“Sergio and I battled for all 36 holes out there today. It was a long day for both of us, and just glad that we were able to contribute something to the cause,” McIlroy said.

“We had a close match this morning with Phil and Keegan, and it didn’t quite go our way. Didn’t feel like we should have lost the match, but at the same time, we did.

“Then the halve against Jimmy and Rickie there this afternoon, felt a little bit like a mini-victory to us, and definitely is a huge halve in terms of momentum for the European team going into tomorrow.”

Garcia said that he and McIlroy had benefitted from a huge stroke of luck at the last hole.

“We got a little bit lucky. We’re not going to deny that. We got a nice lie on 18 in the rough. But yeah, you still have to hit the shot and I was able to hit a really nice 5-wood from 229 yards.”

That halve ensured Europe would at least be level with the Americans at the end of the first day after dropping the morning fourballs 2 1/2 to 1 1/2.

But then 2010 US Open champion Graeme McDowell and French rookie Victor Dubuisson ended the unbeaten run of US pair Phil Mickelson and Keegan Bradley with a superb 3 and 2 victory.

The American duo had won all four previous outings together at the Ryder Cup, going unbeaten at Medinah two years ago and bettering McIlroy and Garcia earlier Friday.

McDowell, who made it a personal mission to get to know better the secretive and shy Dubuisson in the months leading up to Gleneagles, paid tribute to the Frenchman’s solid showing on his Ryder Cup debut.

“Very fortunate to be playing alongside a player who I think really is Europe’s next superstar, I really believe that,” the Northern Irishman said.

“He was awesome today. He didn’t miss a shot. His iron play was just outstanding in really, really tough conditions.”

Dubuisson, just the third Frenchman to play in a Ryder Cup team after Jean Van de Velde in 1999 and Thomas Levet in 2004, said that McDowell had been a calming influence throughout the day.

“This morning when I was walking with him to the tee, he was next to me, and then the stress completely disappeared. I was only feeling positive,” he said.

“I was only feeling positive from the crowd and then I’ve been able to just play my game.”

Lee Westwood, who along with Welsh rookie Jamie Donaldson set the ball rolling for Europe in the afternoon foursomes, by defeating Jim Furyk and Matt Kuchar 2-up, improved his career Ryder Cup points total to 22.

That is just three shy of the all-time best set by Nick Faldo, although the 41-year-old Englishman said he took more pleasure in watching the debut showing from Donaldson.

“When you’ve played a few, it’s fun watching somebody who has made their debut play so well and took to it like a duck to water.

“I had no doubt he would, really. He plays well in the big events. He plays well under pressure. You don’t tend to get much more pressure than a Ryder Cup.”