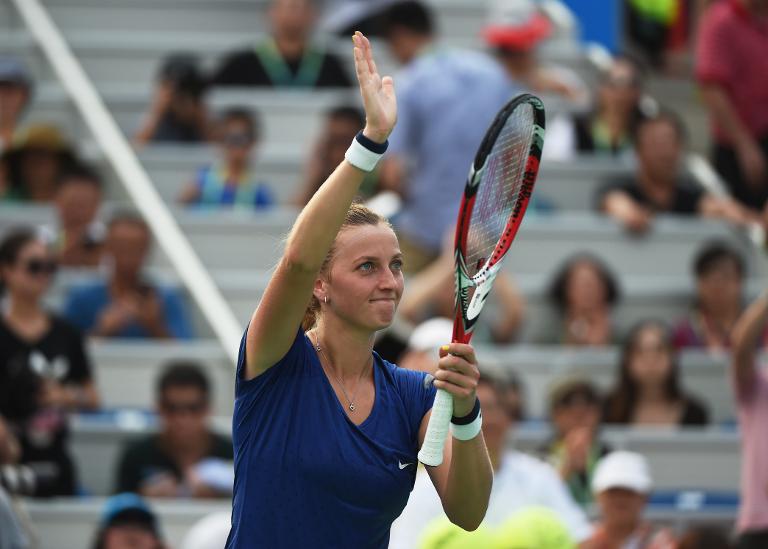 The Wimbledon champion was at her ruthless best, defeating the Canadian 6-3, 6-4 — a result which confirmed her place in next month’s WTA Finals, the season-ending finale featuring the world’s top eight women players.

The final of the premier-ranking tournament was a rematch between the two players who contested the Wimbledon final, and Kvitova reproduced in Wuhan the determination she displayed in London, where she won 6-3, 6-0.

The Czech player broke the world number nine in the second game and maintained her 3-0 lead to clinch the first set.

Kvitova then took an early lead in the second set, breaking serve in the first game before Bouchard appeared to hurt her middle finger on her left hand which was bandaged later in the game.

The third seed then advanced to 5-2 before Bouchard attempted a comeback.

The 20-year-old sixth seed had three break points against Kvitova in the eighth game, and while her opponent clawed her way back into contention with some powerful serving, Bouchard took the game.

The new poster girl for the WTA then took the next game, but Kvitova’s strength at the serve wrapped up the set 6-4.

“It went well for me, for sure. I start(ed) pretty well,” said Kvitova.

“The first game I (broke) her was very important for my confidence. I knew that I had to play a little bit more aggressive than I played the matches before.”

She added: “I (needed) to play a similar game as in Wimbledon, very aggressively going for the shots.”

The victory was Kvitova’s third over Bouchard in the three games they have previously played.

Kvitova crushed her opponent in 55 minutes at Wimbledon, the shortest final ever at the tournament. Bouchard was also defeated when the pair met in Toronto last year.

Victory was sweet for Kvitova, who has enjoyed a return to consistency at Wuhan after a poor run in the North American swing.

She won her second tournament of the year at New Haven, but crashed out of the US Open in the third round to 145th-ranked Serbian qualifier Aleksandra Krunic.

Kvitova then lost to Elina Svitolina of Ukraine, her quarter-final opponent in Wuhan, in her opening match in Cincinnati.

The victory at the Wuhan Optics Valley Tennis Center also means the left-hander will retain her position as world number three. If she had finished runner up, Russian Maria Sharapova would have leapt from fourth to third when the rankings are next updated by the WTA.

Kvitova also confirms her place at the WTA Finals in Singapore. Those who have already made it to the season finale include world number one Serena Williams, Maria Sharapova and Simona Halep.

Bouchard, meanwhile, will move up two places in the WTA rankings to number seven, equalling her career high, following her appearance in the final.

But she was left to regret how she could have approached the final better after the game.

“I think maybe I gave her a bit too much ground,” she said.

“You know, when she’s… on her game, playing her aggressive game, it’s really tough to beat her that way.

“I think I maybe should have tried to go for (it) a bit more, like in the first few shots and kind of play more first-strike tennis — because that’s definitely how she plays — and maybe try to beat her to the punch a bit more often.”

The Wuhan Open, in the central province of Hubei, features the world’s top 20 women players, with the exception of recently-retired local hero Li Na.