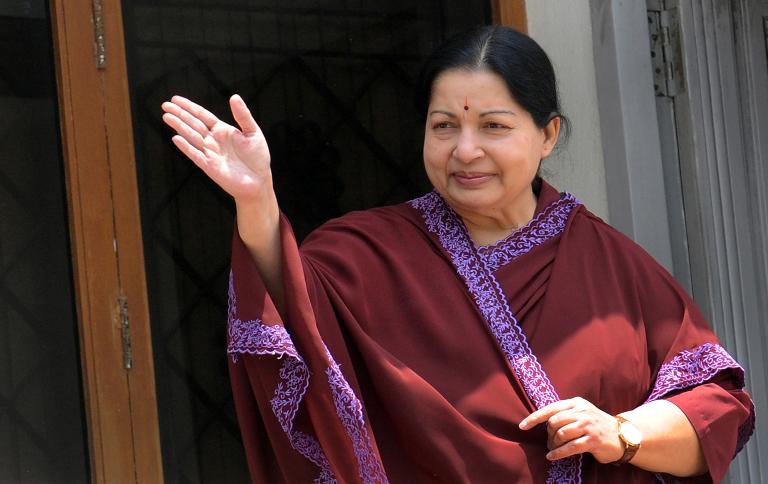 An Indian court on Saturday jailed Jayalalithaa Jayaram, a former film star who became one of the country’s most colourful and controversial politicians, in a corruption case that has run for nearly two decades.

The chief minister of the prosperous southern state of Tamil Nadu was taken into custody after a judge in the southern city of Bangalore found her guilty of amassing illegal wealth and sentenced her to four years in jail.

It was an extraordinary transformation of fortunes for the 66-year-old politician who enjoys huge popularity in Tamil Nadu, where fans know her simply as “Amma” (Mother), and ministers have been known to prostrate themselves before her.

Her AIADMK (All India Anna Dravida Munnetra Kazhagam) party emerged as the third biggest force in the national parliament after winning 37 of the 39 parliamentary seats in the state in this year’s general election.

Jayalalithaa has always dismissed the corruption charge, first brought by a rival politician in the state in 1996, as politically motivated.

Prosecutors said her assets, which reportedly included two 1,000-acre estates in the lush tropical state she ran, were vastly disproportionate to her earnings during her first term as chief minister, which ran from 1991 to 1996.

Public prosecutor G. Bhavani Singh told reporters outside the makeshift court in the southern city of Bangalore that Jayalalithaa had been found guilty of “amassing wealth disproportionate to known sources of her income”.

The judge handed down a fine of a billion rupees ($16 million) and a four-year jail sentence, and police took Jayalalithaa to a state-run hospital in Bangalore, he said.

Singh said she and her three co-accused, who were also found guilty, would then be taken to the city’s main jail, adding she was not eligible to apply for bail due to the length of her sentence.

“The fine will be recovered from the sale of property, including jewellery and lands that were seized during the trial and is in the courtâ€™s custody,” he added.

The ruling means she will be automatically disqualified from parliament in accordance with a Supreme Court order last year that state and national lawmakers should be ejected from office if sentenced to more than three years in jail.

Hundreds of party loyalists had come to Bangalore to show support for their leader, and many were in tears as the news emerged from the closed court session.

Police in Tamil Nadu were on high alert for protests after Saturday’s verdict.

Jayalalithaa has earned the loyalty of people in the southern state with a series of highly populist schemes including an “Amma canteen” that provides lunch for just three rupees (five cents), although she has also drawn accusations of an autocratic governing style.

Her comments during the election campaign that it was time for a change in New Delhi raised speculation that her party could act as kingmaker to Prime Minister Narendra Modi, although in the end, his Bharatiya Janata Party (BJP) won an outright majority.

Nevertheless, she is regarded as an ally of the prime minister and a powerful player in Indian politics.

Jayalalithaa took over the leadership of the AIADMK party after the death of its founder M. G. Ramachandran — her on-screen love interest in multiple movies.

Her three co-accused, who are close associates, were also found guilty of corruption and sentenced to four years in jail, Singh said.

All four defendants were present when the judge delivered the verdict in a makeshift courtroom set up at the main jail in Bangalore.

The case was held in Bangalore rather than Tamil Nadu for security reasons and there was a heavy police presence as the verdict was delivered, with authorities fearing clashes between rival political supporters.