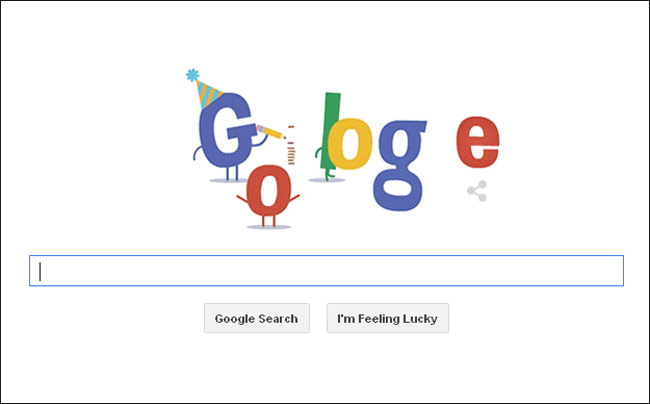 California: Saturday is a milestone for Google as it matures into adulthood â€” it’s the search engine’s 16th birthday and to celebrate, it has given itself a doodle. But the interesting fact is that September 27 isn’t the search giant’s birthday.

The selection of September 27 as Google’s birthday seems to be a one of convenience than the actual date when the company was founded.

Google celebrated September 7 (the day when the company was incorporated) as its birthday till 2005. In 2005 Google changed the date to September 27 to make it coincide with the announcement of the record number of pages that the search engine was indexing.

Google’s front page has the characters personified and measuring how tall they’ve grown over the years in the animated doodle.

The adult â€˜Gâ€™ is seen wearing the party cap and is measuring out other letters against the white wall.

Little ‘o’ is the first to walk up and is joyous at seeing its chalk mark increase. It even does a little jumping celebratory dance, but not for long!

Next up, it’s time for ‘l’ who it turns out has been working it out, because even capital G is startled by the spurt ‘l’ seems to have had. This rivalry among the letters doesn’t go too well with ‘o’ who’s a bit sad at seeing ‘l’ take the lead this year.

The doodle is visible to almost all regions across the world, as depicted by the company on its doodle archive page, which also shows the company having celebrated September 27 as its birthday with a doodle on 9 separate occasions, and in 2009, also as Germany’s Election Day.