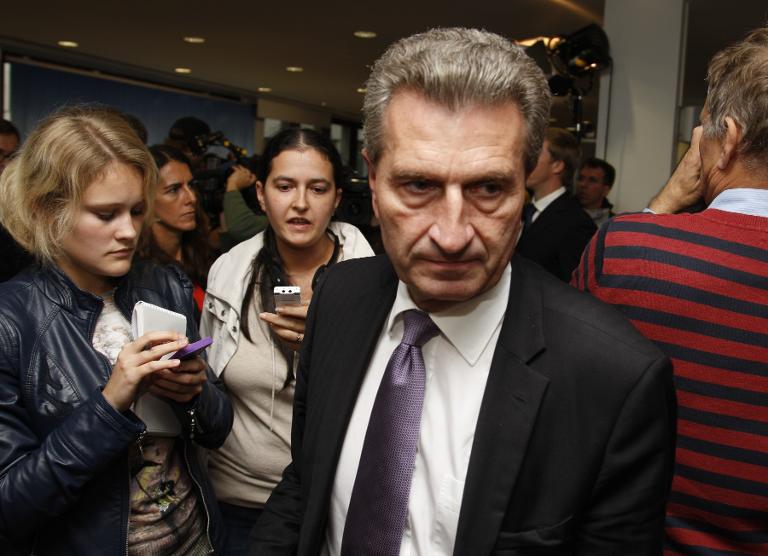 The European Union on Friday unveiled an interim deal meant to end Russia’s latest gas war with Ukraine which could see a return of supplies to the crisis-hit nation and a renewal of trust between the rival neighbours.

The so-called “winter package” unveiled in Berlin came with Moscow threatening to cut off Europe’s own gas shipments and a shaky truce in Ukraine tested by pro-Russian rebels’ defiant plans to stage their own elections.

The EU-brokered deal also highlights the desire by Russia — its flatlining economy already under pressure of Western sanctions — to avoid any further complications with top gas import nations such as Germany.

European Energy Commissioner Guenther Oettinger said after meeting his Russian and Ukrainian counterparts that the sides had reached an “interim solution to ensure supplies until spring”.

But the Russian and Ukranian energy ministers quickly put their own spins on the outcome of the talks and remained far from certain whether the governments in Kiev and Moscow would formally approve the compromise.

The payment would theoretically see Gazprom deliver at least five billion cubic metres of gas to Ukraine through the winter months.

The gas volume is roughly equivalent to the amount Ukraine had said it needed to make it through the winter without imposing draconian energy savings measures that had already left parts of Kiev without hot water for two months.

Russia said the deal would see Ukraine win a six-month discount of 20 percent on the price of $485 per 1,000 cubic metres of gas it set after the February ouster in Kiev of a Kremlin-backed president.

But Ukraine calls that rate illegitimate and now claims that the $385 rate unveiled in Berlin was not a temporary “discount” but the actual future contract price.

Ukranian Energy Minister Yuriy Prodan added that the $3.1 billion payment to Gazprom was meant to cover future deliveries and not the debts that Moscow claims but Kiev disputes.

“The progress is that we have started the negotiations,” Prodan told reporters.

“But for now, we have not found a solution acceptable to all.”

Ukrainian pipelines account for about 15 percent of all gas imported by Europe — reliant on Russia for about a third if its outside supplies.

EU nations fear that Kiev may be forced to tap into their flows if no agreement is found by the time the winter heating season begins.

The three-way meeting was convened amidst general mistrust on all sides and with Moscow-Kiev relations dependent on the fate of a fragile truce in a pro-Russian uprising that has claimed more than 3,200 lives.

On Friday the OSCE mediated a first face-to-face meeting between Russian and Ukrainian military to work on details laid out in the ceasefire deal signed on September 20.

Representatives of the pro-Russian rebels were also present at the meeting near the border in a part of Donetsk province under Ukrainian control, both sides said, though it was unclear whether they engaged in the discussion.

Issues on the table included the removal of mines and heavy weaponry, as well as the creation of a 30-kilometre buffer zone along the front line.

The shaky peace pact — broken on Friday by shelling which killed one civilian — has not averted a fresh bid by the eastern insurgents to set up independent republics through parliamentary and leadership polls on November 2.

Ukrainian President Petro Poroshenko has urged Russia not to recognise the votes and vowed to pursue a goal of the unified country applying for EU membership in 2020 and eventually joining NATO.

But Moscow had appeared ready to up the stakes further in its Cold War-style standoff with the West over Ukraine.

Russia’s energy minister asserted that some European nations’ re-export to Ukraine of Gazprom gas — deliveries meant prop up Kiev’s pro-Western government — could lead to the EU states themselves being cut off.

“We hope that our European partners will stick to the agreements. That is the only way to ensure there are no interruptions in gas deliveries to European consumers,” Alexander Novak told Germany’s Handelsblatt business daily.

Novak’s comments were published only hours after Ukraine’s state energy firm Naftogaz reported an interruption of gas supplies it receives through Hungary.

Naftogaz noted that the apparent cut “came only a few days after a visit to Hungary by representatives from Gazprom”.

Hungarian Prime Minister Viktor Orban conceded that his country could not risk losing access to “its required supply of energy” — Russia covers about 60 percent of the country’s needs — over Ukraine.

The European Union rapped Orban over the decision but took no further action.

“There is nothing preventing EU companies to dispose freely of gas they have purchased from Gazprom,” Commission spokeswoman Helene Kearns said.