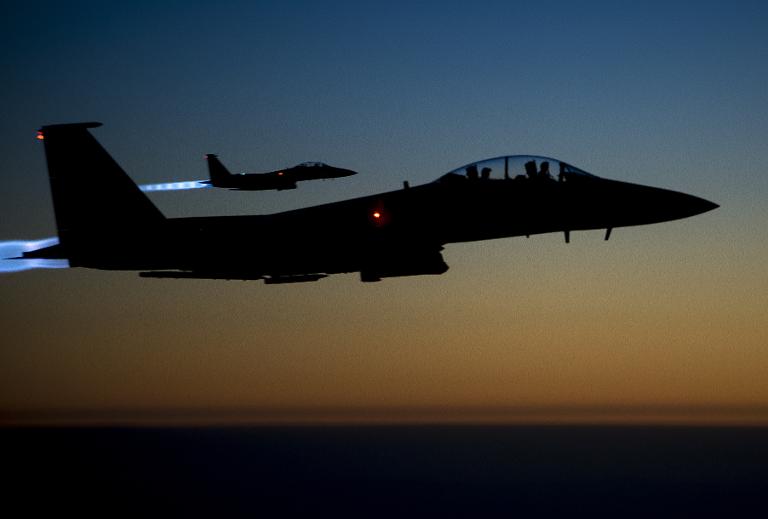 In recent days, Washington and its allies have taken aim at the funding sources of what US President Barack Obama has branded a “network of death”.

American planes destroyed four tanks operated by militants in Syria as well as several vehicles and jihadist positions in Iraq, the Pentagon said.

The US-led coalition also bombed oil refineries in east and northeast Syria where IS jihadists extract crude for sale on the black market, according to the Syrian Observatory for Human Rights, a Britain-based monitoring group.

Experts say sales of oil from Syria and Iraq usually earn IS between $1 million and $3 million a day.

But now, according to activists in Deir Ezzor, pumping has stopped.

“Oil extraction has been halted because of the security situation,” said Leith al-Deiri who spoke to AFP via the Internet.

Another activist from Deir Ezzor, Rayan al-Furati, confirmed the halt.

“There are no traders or clients going to the fields, fearing the strikes,” he said, also via the Internet.

In London, Prime Minister David Cameron sought to convince members of parliament that Britain should join military action against IS in Iraq.

He also warned that such involvement could last years, saying the “hallmarks” of the campaign would be “patience and persistence, not shock and awe”.

Washington is eager to build the broadest possible coalition to tackle IS, which has captured large areas of Syria and Iraq and declared an Islamic “caliphate”.

If, as expected, the British parliament votes to take part, the Royal Air Force will join warplanes from the United States, France, Saudi Arabia, the United Arab Emirates, Bahrain and Jordan hitting IS targets.

Both France and Britain have ruled out launching strikes in Syria, however, unlike the Arab allies taking part in the aerial campaign.

Denmark said it would send seven F-16 fighters to help combat IS militants in Iraq, joining Belgium and the Netherlands which also plan to deploy six aircraft each.

The Netherlands will also provide 250 military personnel and 130 trainers for the Iraqi military, and Greece said it would send arms to Kurdish forces battling the jihadists.

Turkey has so far declined to take part in military action, and has denied claims that its airspace or airbases have been used by coalition forces.

But President Recep Tayyip Erdogan said Friday that Ankara had changed its stance on its involvement in the campaign against IS following the release of Turkish hostages held in Iraq,

He said that “necessary steps” would be taken by parliament on October 2, without elaborating.

IS’s brutal abuses against civilians, rival fighters and Arab and Western hostages, as well as its success in recruiting Western members, have triggered international alarm.

FBI director James Comey said on Thursday there was “no doubt” that jihadists would try to stage revenge attacks in the United States.

“The logic is that if they aspire to be the leader of the global jihad you don’t get there without striking America,” he said.

On Thursday, police in London arrested nine people suspected of links to Islamic extremists, including a notorious radical preacher.

And the FBI said it had identified the Islamic State jihadist who has appeared in videos showing the beheading of two US journalists and a British aid worker, although it declined to give further details.

The coalition strikes in Syria are reported to have killed at least 140 jihadists as well as 13 civilians.

Fighting between regime troops and rebels has continued on the ground in Syria alongside the international air strikes, with the army recapturing a key strategic town near Damascus on Thursday.

The conflict that began in Syria in March 2011 as an uprising against President Bashar al-Assad’s regime has spawned a massive refugee crisis, with more than three million Syrians now taking refuge from the war abroad.