Home Politics UN ready to play a role on Kashmir if India and Pak... 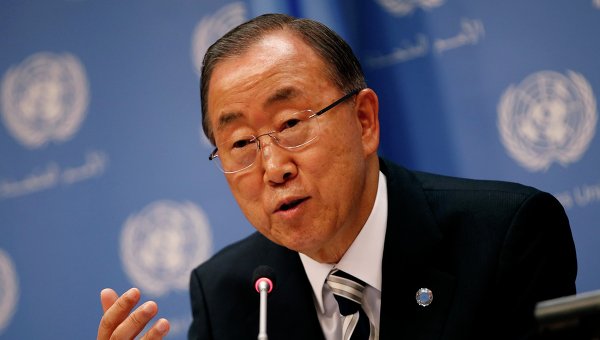 New York: Indian Prime Minister Narendra Modi may have missed out on the The UN climate change summit hosted by the UN Secretary General Ban Ki Moon here in New York but UN’s head believes he can address the climate change issue. Â In the middle of a busy UN General assembly session Ban, in an exclusive interview to Newsmobile, Â Editor in chief, Â Saurabh Shukla, UN Secretary General Ban Ki MoonÂ said he is hoping that Prime Minister Modi will outline his climate change action there during his speech to the General assembly on September . He answered questions on a range of issues from Kashmir to terrorism and on the UNMOGIP controversy. Excerpts from the interview

1. Are you happy with the outcome with the UN climate change summit?Â

The Climate Summit was historic â€“ never had so many leaders gathered to commit to action on climate change, which threatens hard-won peace, prosperity, and opportunity for billions of people.Â
The Summit delivered in the five key areas I had asked Governments, business, finance and civil society in: a strong commitment towards a meaningful, universal climate agreement in Paris in 2015; mobilization of public and private finance; support for putting a price on carbon; strengthening resilience; and the formation of new coalitions to meet the full scope of climate change.Â
Climate change is the defining issue of our age. It is defining our present, and our response will define our future.Â
The Climate Summit has shown that we can rise to the climate challenge.Â

2. Are you disappointed that Indian Prime Minister Narendra Modi couldn’t attend the summit?Â

No, India was represented by Shri Prakash Javadekar, Minister of State for Environment, Forests and Climate Change, and I commend the countryâ€™s initiatives in combating climate change.Â
Prime Minister Modi will be addressing the General Debate and he has an opportunity to address climate action there as well.Â
What is most important is the actions that all countries, including India, will undertake, and the focus must remain on what they say and do.Â

3. Do you think any expansion of the UN Security Council will be possible during your term?Â

The decision of reforming the Security Council is one to be taken by Member States.Â
I encourage the active engagement of Member States, as it is important to reform the Council into become a more transparent, accountable and broadly representative body. The challenge is to find a solution, a formula that adequately meets the expectations of the various interests in the Organization, and is at the same time, practical and delivers in terms of effectiveness and greater efficiency.

4. India asked the UNMOGIP observers to shut down their office in New Delhi were you consulted? Do you think that was in the right spirit?Â

The United Nations Military Observer Group in India and Pakistan (UNMOGIP) has received the Indian Governmentâ€™s request to vacate the premises which it is using in New Delhi. The Mission is currently conducting a market survey to assess costs and identify possible alternative locations. UNMOGIP is in contact with the Indian authorities and will continue its cooperation on this matter.Â

5. Â  Terrorism is a global scourge but there is no agreement on a convention on counter terrorism how can Secretary General intervene to have a proactive role for the UN to curb terrorism?Â

Eliminating terrorism requires international solidarity and a multifaceted approach. Among the many tools we must use, we must also tackle the underlying conditions that provide violent extremist groups the opportunity to take root. Immediate security issues must be addressed.Â
Over the longer-term, the biggest threat to terrorists is not the power of missiles â€“ it is the politics of inclusion: peaceful societies, respect for human rights, education, jobs and real opportunity.Â
Free and independent societies â€“ free from suffering, oppression and occupation â€“ is what will kill terrorism.Â
I welcome the recently adopted Security Council resolution on terrorism and its call for strengthening implementation of the UN Global Counter-Terrorism Strategy.Â
Through the UN Counter-Terrorism Implementation Task Force, we are stepping up efforts in support of Member States and regions seriously affected by terrorism.Â
Through the UN Counter-Terrorism Centre, we are working with Member States to enhance understanding of the foreign terrorist fighter phenomenon and to develop and implement policies to combat their flow.
Through our collective efforts, we must ensure that all counterterrorism actions and policies are consistent with international human rights and humanitarian laws.Â
As the custodian of the Charter of the United Nations, I want to emphasize that all measures must be fully in line with the goals and values and principles of the United Nations.Â

7. What action needs to be taken against states who have been fomenting terrorism? Despite UN’s sanctions against terror groups many countries continue to harbor them what can be done to penalize these countries?Â

This is a matter for Member States, whom I have encouraged to take strong and united action to combat terrorism. Member States continue to consider these issues.Â

8. South Asia is considered a volatile political region how can sg help to reduce tensions between India and Pakistan?Â

I have long expressed my hope that any issues be addressed through dialogue.Â

9. Do you think the UN can act as a facilitator for lasting peace in Kashmir?Â

The United Nations continues to be willing to provide its good offices, should they be requested by both parties.Â

10. Do you think the UN could have played a role in disaster relief after floods in Kashmir?

I would like to express my deepest condolences to the families of those who were affected, as well as to the Government of India.Â
I commend the skilled disaster management actions taken by the Government, and the United Nations stands by to assist if requested.Â
Â