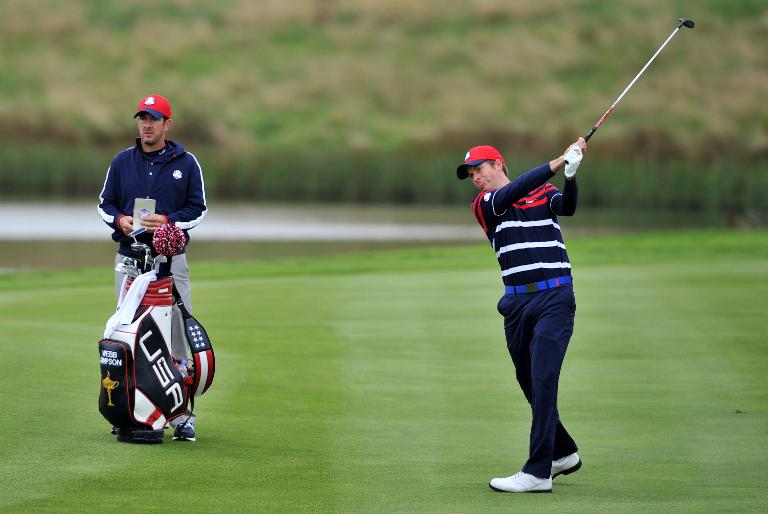 Webb Simpson of the United States hit the first ball of the 40th Ryder Cup at Gleneagles on Friday with Europe aiming to make it six wins out of seven in the biennial team event.

The conditions were chilly, but the reception was hot as the European pair of Justin Rose and Henrik Stenson stepped out of the players’ tunnel leading to a packed first tee.

Simpson came out with reigning Masters champion Bubba Watson. The pair were playing together for a fourth time in the Ryder Cup.

Rose of England and Stenson of Sweden were playing together for the first time.

The match was one of four fourball encounters marking the opening morning’s action. The afternoon will see four foursomes, or alternate ball, games.

Reigning US Open champion Martin Kaymer of Germany and Thomas Bjorn teed off for Europe in the morning’s second Ryder Cup fourballs match against Americans Rickie Fowler and Jimmy Walker.

Denmark’s Bjorn, playing in his first Ryder Cup since 2002, is 2-0 in Cup fourball matches while Kaymer is 2-1 in the format in the biennial US-Europe showdown.

Fowler lost his fourball appearance two years ago at Medinah in his Ryder Cup debut, losing to Kaymer and Ian Poulter, while Walker made his Cup debut at 35.

A huge and often noisy crowd filled the stands and lined the fairway but became silent for tee shots, with Walker becoming the first American to find the opening fairway. Bjorn and Kaymer did so as well.