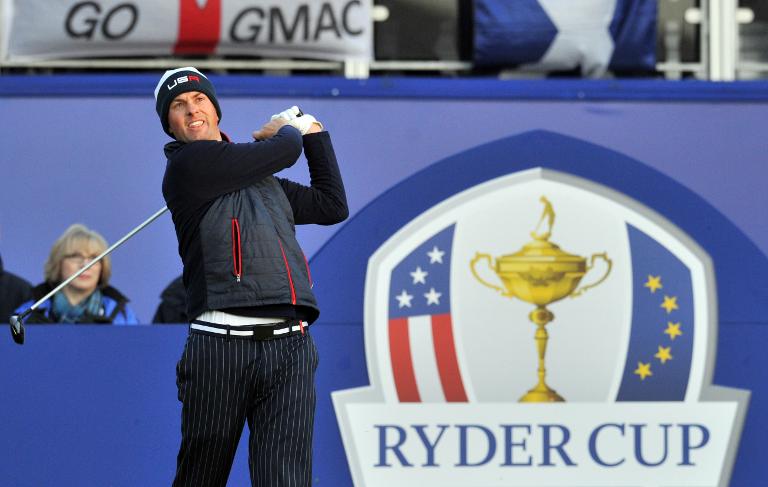 The line-up includes most of the world’s best golfers but the nerves that go with playing in the Ryder Cup were on display from the start on Friday.

Perhaps the shouts of “Europe, Europe, Europe” from the huge home crowd unnerved him but US player Webb Simpson, who had the honour of hitting the opener, made an edgy short backswing and skyed his tee-shot, barely reaching the fairway, prompting gasps from the grandstand.

His team mate and double US Masters champion Bubba Watson, just as at Medinah two years ago, embraced the feverish atmosphere and encouraged the chanting to continue as he hit his opening shot but it didn’t help him and he missed the fairway.

Their European opponents, Justin Rose and Henrik Stenson, proved that the golfing adage of getting off to a good still stands, as both hit the fairway, setting the tone for a match that they would easily win, 5 and 4.

First day jitters are renowned at the transatlantic team event, with former captain Colin Montgomerie among those who says his body felt like it was seizing up whenever he started a Ryder Cup campaign.

Tiger Woods, the former world number one who is absent this week, and this year’s US talisman Phil Mickelson are among those who have hit a shocking opener in the contest.

By the time that Stephen Gallagher, a rookie and the only Scot in the team, reached the first tee on Friday with his team mate and Ryder Cup hero Ian Poulter, the sun was shining and the wind had disappeared.

Even the noisy backing from the crowd did not exempt them from the pressure.

Gallagher landed in a bunker off the tee, failing to recover, while Poulter missed a three-foot putt to halve the hole, setting the tone for a match they eventually lost 5 and 4 to the young American rookies Jordan Spieth and Patrick Reed.

The chill that cut through the air at Gleneagles probably didn’t lend itself to steady hands either.

Mickelson started his match wearing gloves and he kept his jacket on for most of the morning. After smacking his drive straight down the middle he didn’t hit another fairway on the front nine.

Mickelson’s team mate Keegan Bradley, meanwhile, was spraying the ball all over the course. After missing the fifth fairway on the left, he blocked his approach out to the right and picked his ball up after failing to put his chip anywhere near the hole.

Their European opponents Rory McIlroy and Sergio Garcia, the world numbers one and three respectively, showed few nerves until they reached the seventh green, where both of them made clumsy bogeys to lose the hole and leave the match all square.