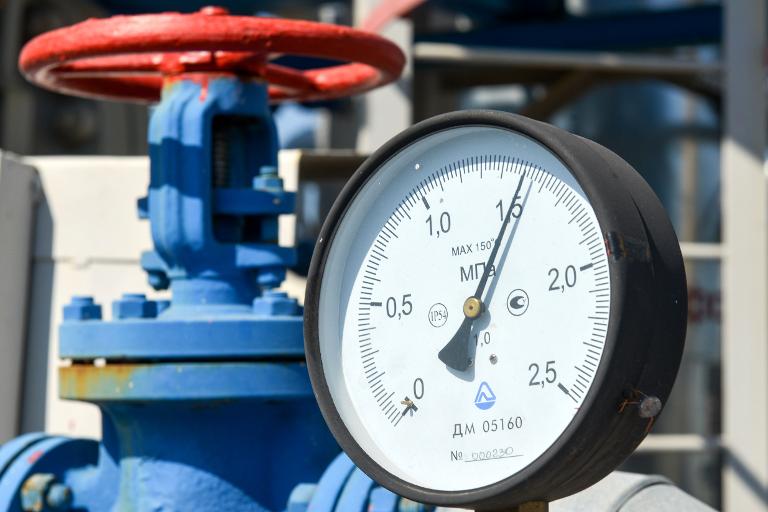 Russia warned Europe on Friday that it may cut off gas supplies because some countries have been re-exporting supplies to Ukraine to help Kiev through its latest energy war with Moscow.

The blunt threat came as energy chiefs gathered in Berlin for EU-mediated talks aimed at halting a Russian gas supply freeze to Ukraine that could leave parts of the war-scarred nation without heat this winter.

The three-way meeting was convened with distrust between all sides and relations between Moscow and Kiev dependent on the fate of a fragile truce in a pro-Russian rebel uprising that has claimed more than 3,200 lives.

The shaky peace pact has helped stem the bloodiest fighting. But it has not averted a fresh bid by the eastern insurgents to set up independent republics through parliamentary and leadership polls on November 2.

Ukrainian President Petro Poroshenko called Thursday on Russia not to recognise the votes and vowed to pursue a goal of the unified country applying for EU membership in 2020 and eventually joining NATO.

But Russia — its economy stagnant and state revenues dependent on oil and gas sales — appeared ready to up the stakes further in its Cold War-style standoff with the West over Ukraine.

Energy Minister Alexander Novak asserted that the re-export to Ukraine of gas Europe buys from Russia was illegal and could see some of its nations go without fuel shipments from state energy giant Gazprom for the first time since 2009.

“We hope that our European partners will stick to the agreements. That is the only way to ensure there are no interruptions in gas deliveries to European consumers,” Novak told Friday’s edition of Germany’s Handelsblatt business daily.

Novak’s comments were published only hours after Ukraine’s state energy firm Naftogaz reported an interruption of gas supplies it receives through Hungary.

Naftogaz noted that the apparent cut “came only a few days after a visit to Hungary by representatives from (Russian state gas firm) Gazprom”.

Hungarian Prime Minister Viktor Orban conceded that his country could not risk losing access to Russian gas — responsible for about 60 percent of the country’s supplies — over Ukraine.

“Hungary can not get into a situation in which, due to the Russian-Ukrainian conflict, it cannot access its required supply of energy,” Orban said on state radio.

The European Union rapped Hungary over the supply interruption.

“There is nothing preventing EU companies to dispose freely of gas they have purchased from Gazprom, and this includes selling this gas to customers both within the EU as well as to third countries such as Ukraine,” Commission spokeswoman Helene Banner said in Brussels.

Yet European sales — even if uninterrupted — would help Ukraine make up only a fraction of the volumes it usually buys from Russia.

Ukraine imported half of all gas it consumed last year from its historic eastern master. The so-called “reverse flow” shipments from Europe that Kiev was hoping for would have filled slighty more than a third of that gap.

Russia ended all gas sales to Ukraine in June after Kiev balked at paying a higher price imposed by Moscow in the wake of the February ouster of an unpopular Kremlin-backed president.

Ukrainian pipelines account for about 15 percent of all gas imported by Europe — which is reliant on Russia for about a third if its outside supplies.

EU nations fear that Kiev may be forced to tap into their flows once the winter heating season begins.

Neither Ukraine nor the European Union expect Friday’s negotiations — delayed by Russia on several occasions — to reach a breakthrough and are instead hoping to lay the groundwork for an interim deal.

Moscow’s VTB Capital investment bank estimates that European utilities and gas traders paid Gazprom an average of $372 per 1,000 cubic metres in the first three months of the year.

Diplomats said the European Commission was proposing a compromise that would see Naftogaz pay Gazprom $385 per 1,000 cubic metres in the winter and $325 in the summer months.

But Gazprom walked away from a similar proposal just days before it shut off Ukraine’s tap.