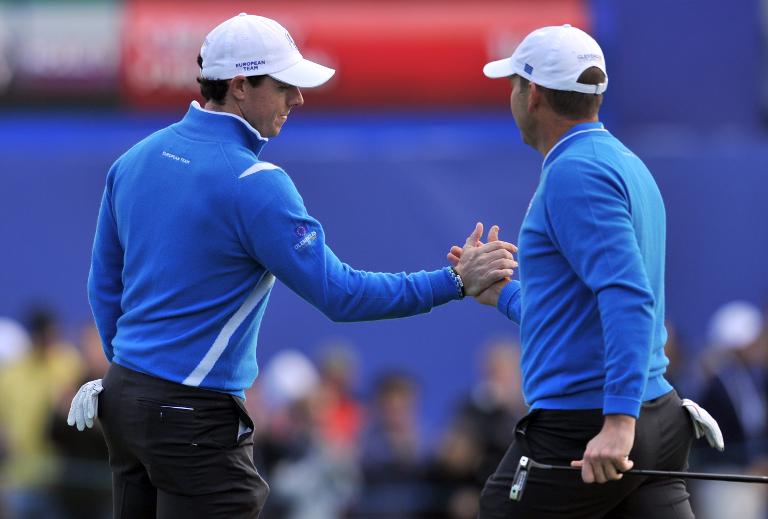 Top-ranked Rory McIlroy and Sergio Garcia were all square at the turn with Americans Jimmy Walker and Rickie Fowler in Friday’s third foursomes match of the Ryder Cup at Gleneages.

McIlroy, coming off British Open and PGA Championship triumphs, and third-ranked Spaniard Garcia took the lead by winning the third hole with a par, but Garcia’s tee shot went out of bounds left at the fifth and the Americans squared the match.

Garcia answered with a long birdie putt to win the par-3 sixth but a bogey at seven squared the match again and both teams birdied the eighth and parred the ninth.

Both pairings played in the morning fourball matches that began the 40th edition of the biennial US-Europe team showdown.

Walker chipped in for birdie at 16 and sank a six-foot birdie putt at 18 to halve a match against Martin Kaymer and Thomas Bjorn in which the Europeans led from the first hole until the final shot.

McIlroy, who captured the British Open and PGA Championship in the past two months, and Garcia lost at the 18th to Phil Mickelson and Keegan Bradley.

Those results combined to lift the US squad ahead 2 1/2 to 1 1/2 after fourballs as they try to reach 14 1/2 points to reclaim the Cup. Europe need 14 points to keep the trophy.