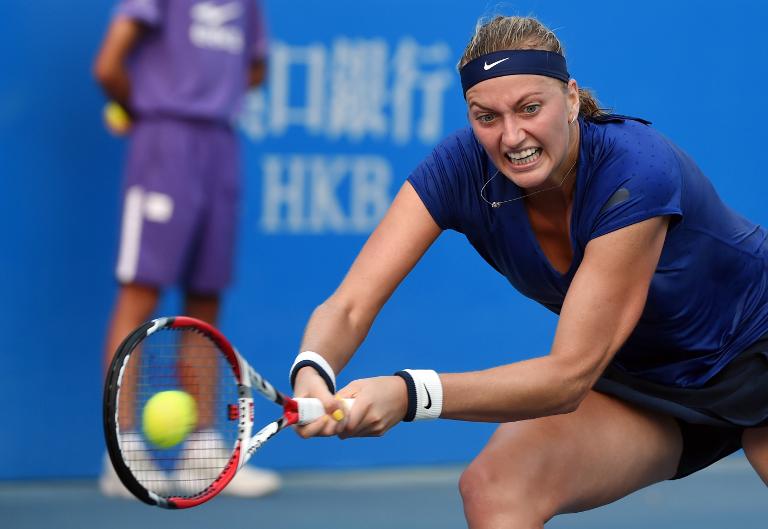 Petra Kvitova and Eugenie Bouchard will battle for the Wuhan Open title in a re-match of this year’s Wimbledon final after winning their semi-finals Friday.

World number three Kvitova is vying for her third title of the year and will seal a place in the end-of-season championships in Singapore if she wins the final of the inaugural tournament on Saturday.

The Czech advanced at the expense of Ukraine’s Elina Svitolina, who put in another feisty performance that defied her lowly 34th place in the rankings.

Kvitova broke serve in the sixth game to lead 4-2, taking the opening set 6-4.

The pair traded breaks in the second set and were locked at 5-5 until Kvitova raced through the 11th game to serve for the match. She survived a tense finish to seal the victory.

The Ukrainian had shown great determination in Wuhan, battling back to win sets after trailing 5-0 against Germany’s Sabine Lisicki in the second round and 4-1 to world number eight Angelique Kerber in the quarters.

But Kvitova proved to be a step too far for the 20-year-old.

Kvitova will join the season’s top eight players for the Singapore finale if she wins in Wuhan. Those who have already made it to the WTA Finals include world number one Serena Williams, Maria Sharapova and Simona Halep.

The 24-year-old will meet world number nine Bouchard in Wuhan for a replay of their Wimbledon final, which Kvitova won convincingly 6-3, 6-0.

“It feels good, for sure… I’m glad that I’m in the final again,” said Kvitova, who also won the title in New Haven last month.

“Today I think it was really great match. I mean, I felt pretty well and we had great tennis out there I think.”

Both players — who are also chasing points to make the WTA Finals – played an aggressive game.

Wozniacki appeared to have sustained a minor hamstring injury which she received treatment for in the fourth game of the second set.

The first break point of the set came two games later, which Bouchard survived, and the Canadian then broke Wozniacki to make it 4-3 before going on to clinch the match.

The Wuhan Open, in the central province of Hubei, features the world’s top 20 women players, with the exception of recently retired local hero Li Na.