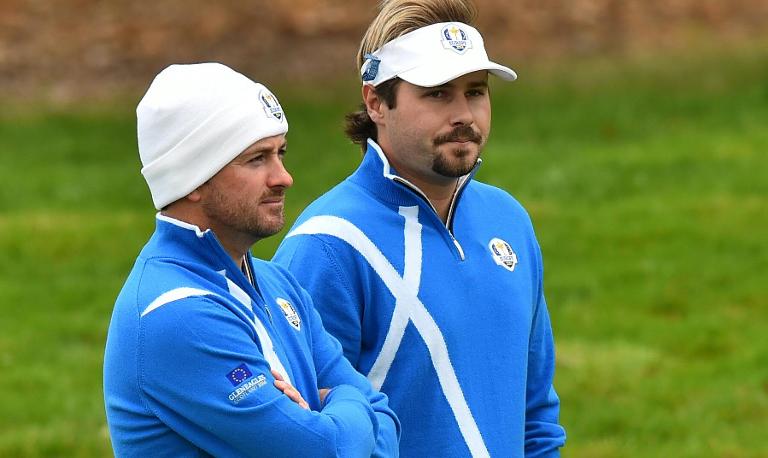 Rookie Victor Dubuisson and 2010 US Open champion Graeme McDowell defeated Phil Mickelson and Keegan Bradley 3 and 2 in Friday’s fourth and final foursomes at the Ryder Cup.

The 24-year-old from Cannes is just the third Frenchman to play the Ryder Cup after Jean Van de Velde and Thomas Levet and he is the youngest member of the European team.

Up against them were star US pairing Phil Mickelson and Keegan Bradley, who made it four career wins out of four in the morning fourballs, edging Rory McIlroy and Sergio Garcia at the last.

That win left the United States 2 1/2 to 1 1/2 up over Europe at the halfway stage of the first day.

But it was the underdog European pair who birdied the second to move ahead and bogeys from their rival duo at the fourth and fifth opened up a three-hole gap.

A three-putt from McDowell and Dubuisson cast a lifeline to the Americans at the eighth and when Dubuisson failed to hole a nine-footer for birdie at the next, the match went round the turn with the European team just one ahead.

That lead stretched to 3-up by the 12th before the Americans nicked one back at the next with a par.

McDowell clinched the win with a 15-footer birdie putt at the 15th, handing Mickelson and Bradley their first Ryder Cup defeat in five outings.

“It was a lot of fun today and Victor and I were really fired up for this afternoon,” McDowell said.

Dubuisson said the crowd had helped him in his Ryder Cup debut.

“The difference here is that all the crowd is cheering for you and you only get positive energy,” he said.