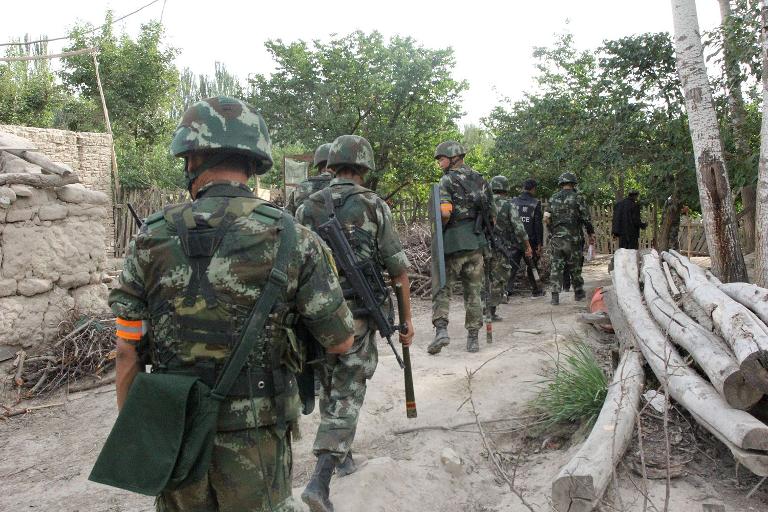 Forty “rioters” were killed in China’s far-western Xinjiang region following a series of explosions last Sunday, the worst incident of violence in months, the regional government has said after a four-day news blackout.

Residents on Friday described heavy security in place days after the violence.

Two “rioters” were captured, it added, while the main suspect, whose name was given as Mamat Tursun, was shot dead.

The violence took place just two days before the sentencing of prominent Muslim Uighur scholar Ilham Tohti, who was on trial on charges of separatism.

Chinese state media had previously only stated that two people had been killed in the incident. The ruling Communist Party tightly restricts access to the restive region, and information is difficult to independently verify.

Such a delay in the release of details is not uncommon.

“Security forces are still in the street,” said one receptionist.

A woman who answered the phone at another inn also gave an account of security out in force, and that business had suffered as “lots of people don’t come these days”.

Tohti, a former university professor who has been critical of Beijing’s policies in the vast western region, was sentenced to life in prison on Tuesday.

The United States, the European Union, and several human rights groups have called for the release of Tohti, 44, whose prosecution risks silencing moderate Uighur voices and cutting off the possibility of dialogue, analysts say.

Critics also warned his conviction could add to tensions in the restive region.

Teng Biao, a leading human rights lawyer and friend of Tohti, wrote this week that rather than a life sentence, the academic should be awarded a Nobel prize.

“The Chinese communist authorities, with their excessive violence, have created hostility, division and despair in Xinjiang and Tibet,” Teng wrote in The Guardian newspaper.

“Tohti has denounced violence and devoted himself to bridging the divide and promoting understanding and tolerance.”

Beijing on Friday dismissed the possibility that the Tohti verdict could negatively impact China’s relations with other countries.

The Global Times, a tabloid run by the official Communist Party mouthpiece People’s Daily, said in a column on its editorial page that Tohti’s case should be seen as warning to anyone trying to break China apart.

“Chinese separatists must be fully aware of the red line drawn by the Chinese constitution and criminal law,” it said.

“Tohti could serve as a lesson for them to realise what price they have to pay if they continue their dangerous pace.”

According to the Tianshan report, the “organised and serious” attack comprised four explosions that took place Sunday evening, targeting two police stations, an outdoor market and a shop.

Among the 54 civilians injured were 32 members of China’s mostly Muslim Uighur minority and 22 Han Chinese, it said.

The 40 “rioters” killed had either blown themselves up or were shot dead by police, Tianshan said.

Police said that Mamat Tursun, the alleged ringleader of Sunday’s attack, had been “gradually developing into an extremist” since 2003 and had “called on other people to join his terrorist group when working on construction projects”, according to the official Xinhua news agency.

In the past year, escalating violence between locals and security forces in Xinjiang — the traditional homeland of the Uighurs — has claimed more than 200 lives and prompted Beijing to launch a security crackdown.

Among the most shocking attacks was a May assault on a market in the regional capital Urumqi, where more than 30 people were killed.

“Making and showing banners and other material of religious extremism will be criminalised,” the state-run Xinhua news agency said in a summary of the regulations.

The court also said that the use of insults such as “religious traitor” and “heretic” could lead to criminal conviction.

Xinjiang, a resource-rich region which abuts Central Asia, is home to about 10 million Uighurs, who mostly follow Sunni Islam.