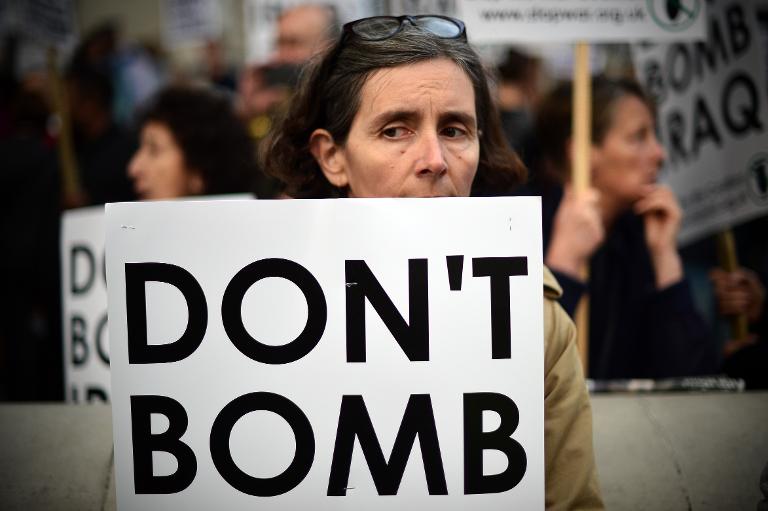 British lawmakers vote Friday on whether to bomb Islamic State militants in Iraq, joining United States-led air strikes against a group that has seized control of swathes of the war-torn country.

The hours-long debate is to begin with a speech by Prime Minister David Cameron at 0930 GMT and the motion is likely to pass as it is backed by the main opposition parties as well as the government.

Cameron has urged Britain not to be “frozen with fear” about re-entering conflict in a country its last troops from the previous war left only in 2011.

“We are facing an evil against which the whole world must unite. And, as ever in the cause of freedom, democracy and justice, Britain will play its part,” Cameron told a United Nations summit in New York, before flying home for the vote.

Press reports said that British jets were poised to begin raids on IS in the days following the vote, beginning a military campaign that Defence Secretary Michael Fallon has said could last years.

France on Friday became the first foreign ally to join US air strikes in Iraq, which Washington first began in August to support Iraqi and Kurdish peshmerga forces battling IS advances.

Belgium and the Netherlands are expected to send fighter jets in the coming weeks.

Backed by five Arab countries, the US expanded its campaign this week to bomb IS targets in Syria, where jihadists have carved out areas of control during a bloody three-year civil war.

The Islamic State group’s goal is to set up a “caliphate” straddling the Iraq-Syria border.

Mindful of a war-weary public and a previous motion on airstrikes on Syria last year that was voted down, the British governent has been careful to spell out its legal case and the limits of the campaign.

The parliamentary motion stresses that the government will not deploy soldiers on the ground in Iraq and that a separate vote would be required for Britain to join the military action in Syria.

“We will not be providing ground combat troops… we don’t think, frankly, public opinion would support such involvement,” said Foreign Secretary Philip Hammond.

“If ground forces are needed they have to come from regional countries – primarily from Iraq itself.”

But Tony Blair, who was prime minister when Britain went to war in Afghanistan in 2001 and Iraq in 2003, has urged the government not to rule out sending ground troops again.

“I accept fully there is no appetite for ground engagement in the West,” Blair wrote in an essay published on the website of the Tony Blair Faith Foundation on Monday.

“But we should not rule it out in the future if it is absolutely necessary.”

On the eve of the vote, about 200 protesters rallied near the prime minister’s office chanting “1-2-3-4, don’t want another war.”

“I’m really disappointed that we have to come back here, after two wars,” said Dave Gilchrist, a 57-year-old teacher. “The West doesn’t seem to have learned anything at all.”

Stop the War, a coalition of campaigners, has promised further protests if military action starts.

Cameron has said that the “murderous plans” of extremists pose a direct threat to British people, and on Thursday police in London arrested nine people suspected of extremist Islamist links.

Officials believe some 500 Britons have travelled to fight with IS, and a British-accented fighter is suspected of being the executioner of two captive US journalists and a British aid worker shown in gruesome videos in recent weeks.

IS has threatened the lives of further hostages, including a British man who travelled to Syria to deliver aid to internally displaced people, in response to Western military action in the region.