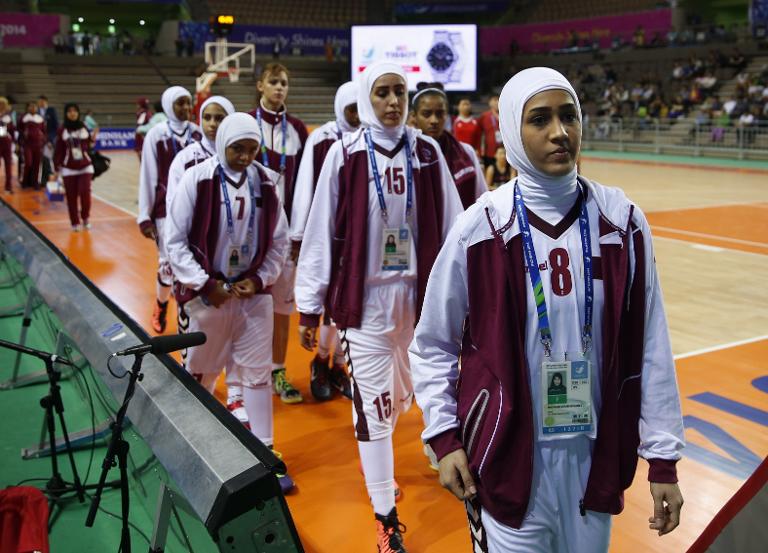 Basketball’s world body insisted its ban on headwear has no “religious connotation” Friday after Qatar’s women’s team quit the Asian Games because they were not allowed to play in hijab scarves.

The International Basketball Federation (FIBA) strongly denied its rule, at the centre of the biggest controversy at the Games in Incheon, was aimed at any particular faith.

“FIBA’s regulations apply on a global scale and without any religious connotation,” the body said in a statement.

“While certain groups have interpreted the provisions of the official basketball rules as a ban against the participation of players of certain faiths in basketball competitions, the uniform regulations are of a purely sporting nature.”

The Qatari team, about half of whom wear the Muslim hijab headscarf, arrived home on Friday after quitting the regional Olympics in South Korea before their last scheduled game.

FIBA indicated a further softening of the rule, already relaxed at national level, when it said tests could be carried out in international matches next year.

Qatar, formally listed as “disqualified” from the Asian Games after forfeiting their first two games, were the only Muslim country to enter a women’s team.

“FIBA regrets that a delegation was sent to the Asian Games with uniforms that do not conform to the official basketball regulations,” FIBA said, without naming Qatar.

“All national member federations are aware of the official basketball regulations,” it said.

“These regulations were enacted 20 years ago without any other sort of considerations than sports-related ones and without any major complaints until very recently,” it added.

Kwon Hyung-Sang, secretary general of the Incheon Asian Games Organising Committee (IAGOC), expressed regret that Qatar could not play but said he could not override FIBA.

“Qatar’s women basketball players have not been able to play and I truly regret this. However IAGOC have to consult with FIBA in terms of sporting policies,” Kwon told reporters.

“Without prior authorisation or approval from FIBA we cannot allow the women to continue the game.”

FIBA does not allow headwear more than 5 centimetres (2 inches.

The rule ran into trouble in July when two Sikh players from India were reportedly forced to remove their turbans at the Asia Cup in China and had to tie their hair with elastic bands.

In August, reports also said that India’s Anmol Singh was ordered to take off his patka head covering at the FIBA Asia U18 Championship in Doha.

After complaints, FIBA this month relaxed the ban at national level for a two-year test period. On Friday, they said “international tests” may be held from next year.

“Recent complaints have led FIBA to initiate a revision process,” the body said.

The conciliatory stance did not come early enough for the Qatari players, who angrily slammed the FIBA rule before they flew out of Incheon.

“This is an insult to us, they did not respect our religion,” Qatar forward Refaa Morjan Mohammed told AFP on Thursday.

Football is among the sports to allow hijabs and other religious headwear after world body FIFA relaxed its ban earlier this year.