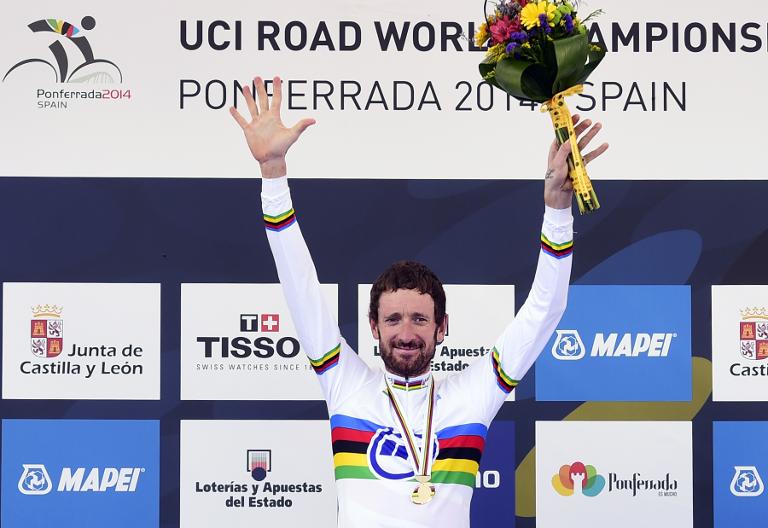 Bradley Wiggins said that his exclusion from Sky’s Tour de France team in July had a silver lining as it enabled him to dethrone Tony Martin at the world timetrial championships.

The Olympic champion had twice before finished runner-up to the German — in 2011 and 2013 — but he finished 26sec clear of Martin on the 47.1km course in Ponferrada, Spain on Wednesday to win his first world title.

And while Martin had been involved in July’s Grand Boucle — winning two stages, including the timetrial — and the Vuelta a Espana, which ended 10 days ago and in which again he won a race against the clock, Wiggins took a different approach.

“I don’t regret (missing the Tour) really, it was what it was. What it did was allowed me to think about this more,” admitted Wiggins.

“I had a completely different way of preparing for this than Tony who obviously did the Tour and Vuelta (both three-week races).

“I did the Tour of Britain (a one-week race), so I’d only had 35 or 36 days of racing this year, but a lot of specific training for this discipline. Obviously that’s helped me.

“There’s a tradition of doing the Vuelta before the worlds but I’ve done it the opposite way this time and it’s worked.

“Certainly there’s a lot of freshness in me this year and I feel that it’s worked for me; it might not work for everybody but not doing the Tour has allowed me to end up doing something else through July with the Commonwealth Games (where he won a silver on the track in the team pursuit).

“That took my mind off (the Tour), I was doing something different and keeping fit as well.”

Martin, who had won the last three world timetrial gold medals, acknowledged that he felt tired.

“I always said before I’m not a machine. I know that almost everyone expected me to win but I always said, especially Bradley also has a big, big chance,” said the man known as the ‘Panzawagen’.

“I already felt a little bit tired in the team timetrial. For sure it was not the best for motivation and for the preparation for today.

“I was a little bit tired, I didn’t have the best condition today. I think that’s the biggest point that I couldn’t battle Bradley in the final of this race.”

Martin got to the first time check 4sec quicker than Wiggins but then lost almost a second a kilometre over the rest of the course, with most of that coming in the final 10km.

Wiggins managed an incredible average speed of over 50km/h.

Yet he insisted that the course suited him more than Martin, who is widely regarded as the best timetriallist in the world.

“The way he rides, his position on the bike and everything, in some ways he’s quite superior to other people.

“In the same way that Fabian (Cancellara, a four-time world champion) five or six years ago, everyone thought he was unbeatable. But on a course like this, it really changes, it becomes power to weight on those long drags that are thresholds.

“I worked really hard through the summer to get (down) to my Tour racing weight of 72kg, so I knew if I could sustain 470, 480 watts, at 72kg in that final, it’s self-explanatory that you’re going to go faster.

“So yeah, I thought on this course I could get the better of him.”