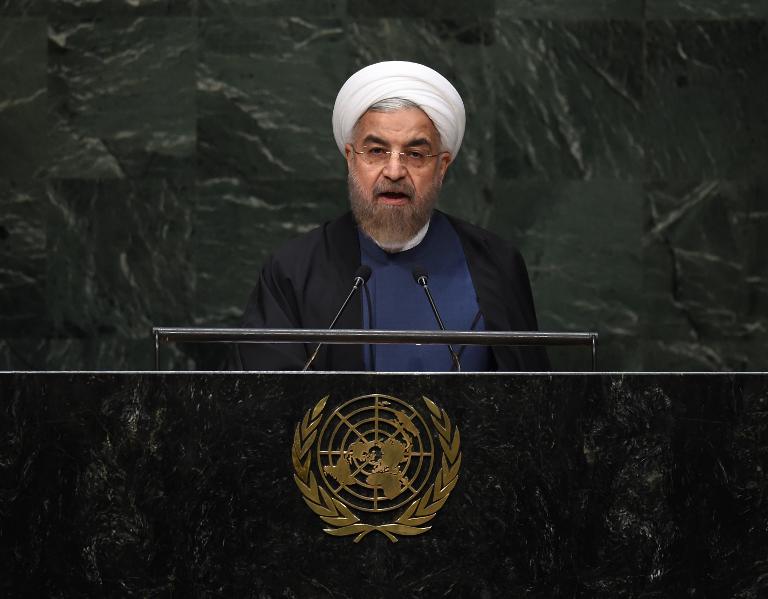 Iranian President Hassan Rouhani wavered between criticism and engagement in a speech to the UN on Thursday, slamming Western blunders in the Middle East but signalling commitment to securing a deal on nuclear power.

Days after the United States widened bombing raids against jihadists in Iraq to Syria, Rouhani warned that regional moderates — albeit with international support — were best placed to resolve extremism threatening the world.

“The strategic blunders of the West in the Middle East, Central Asia and the Caucasus have turned these parts of the world into a haven for terrorists and extremists,” he told the UN General Assembly in New York.

“Improper interference in the developments in Syria are clear examples of this erroneous strategic approach in the Middle East.”

The United States has the support of five Arab countries in its air campaign to defeat what President Barack Obama on Wednesday called a “network of death” — the Islamic State group.

Rouhani called for “moderate politicians” in the Middle East to take the lead in countering “violence and terrorism” and said it was a “myth” that Iran seeks to control Arab countries in the region.

“The right solution to this quandary comes from within the region… with international support and not from outside,” he said, warning otherwise there would be “repercussions for the whole world.”

Rouhani is determined to lift damaging Western sanctions that have hit his economy hard and prevented oil companies from doing business in the oil-rich country.

US Secretary of State John Kerry is to hold three-way talks with his Iranian counterpart Mohammad Javad Zarif and EU foreign policy chief Catherine Ashton later Thursday as they push for a nuclear deal by a November 24 deadline.

“We are determined to continue negotiations with our interlocutors in earnest and good faith, based on mutual respect and confidence,” Rouhani said.

A deal would be a “historic opportunity” for the West that would send a message of “peace and security,” he added.

The five permanent members of the UN Security Council plus Germany are seeking to scale back Tehran’s nuclear activities by November 24. Thorny talks have taken place on the sidelines of the General Assembly.

Iran wants UN and Western sanctions lifted, and is pushing for the right to enrich uranium, a process which can produce material for a bomb.

It has long denied it is seeking to develop a nuclear arsenal.

Rouhani told the United Nations that “oppressive sanctions” against Iran were a “strategic mistake” and that any delay in reaching a final agreement would only raise economic costs.

Negotiators say there are major hurdles to overcome but that meeting on the sidelines of the General Assembly could facilitate high-powered diplomacy.

They have already missed an earlier July deadline to secure a deal.

Western nations agreed to lift some sanctions against Iran last year in exchange for an agreement from Tehran to curb some nuclear activities and to get to work on a comprehensive agreement.

At the UN for a second time since being elected in 2013, Rouhani has been courted by European leaders seeking greater support from Tehran in the war on IS, responsible for beheading two Americans and one British hostage.

But Rouhani told veteran US interviewer Charlie Rose that now is not the moment to meet face to face with Obama, despite talking on the telephone at the end of last year’s Assembly.

Tehran has been unusually accepting of the US military action against jihadists in Iraq, where Iranian advisors are also tackling IS, but is a strong backer of the Syrian government — a regime Washington says has no legitimacy.

Underlining the growing importance that the West affords Tehran, British Prime Minister David Cameron held landmark talks with Rouhani on Wednesday, leading Cameron to declare that Iran could be “part of the solution.”

They were the first such talks between Britain and Iran since the 1979 Islamic revolution.

On Friday, he had been due to take his personal commitment to “constructive engagement” a step further by addressing interfaith leaders and guests at a Manhattan church, the Cathedral of Saint John the Divine.

But organizers said Thursday the event was canceled due to “demands on the president’s schedule.” The Iran mission to the UN apologized and suggested they will “revisit” the scheduling at a later date, they said.